The U.S. Fed meets on Tuesday and Wednesday and looks set to debate when and how to kick off a bond taper, even as a surging Delta variant caseload revives economic risks from a pandemic many policymakers had hoped was drawing to a close.

In June, officials launched the discussion over when to start cutting monthly purchases of $120 billion of Treasuries and mortgage-backed securities - it's unlikely they will put that on ice even though the rate of new daily U.S. infections has doubled since.

The Delta surge is too new to show up in data, but figures reflect a growing conundrum: inflation running much hotter than expected and job growth still well short of the "maximum employment" goal.

Meanwhile a partisan fight over raising the debt ceiling has erupted in Congress, with the Treasury Department on July 31 technically bumping up against its statutory debt limit.

U.S. earnings are into full swing and investors will now watch tech heavyweights to gauge whether a recent shift away from reflation trade and into big growth stocks that led markets for the last decade will continue.

FAANG stocks - Facebook (FB.O), Amazon (AMZN.O), Apple (AAPL.O), Netflix (NFLX.O), and Google parent company Alphabet (GOOGL.O) - are usually known for delivering stellar stock market returns. But only Facebook and Alphabet have beaten the S&P 500 in 2021 as investors piled into financials, energy firms and other companies that should benefit from a powerful U.S. economic rebound.

Worries over "peak growth" and a resurgence of COVID-19 recently stalled that rotation. Earnings from Apple and Alphabet on Tuesday, Facebook on Wednesday and Amazon on Thursday could accelerate a shift back into growth. Netflix shares tumbling after it forecast third-quarter paid subscriber additions below estimates provides a cautionary tale. 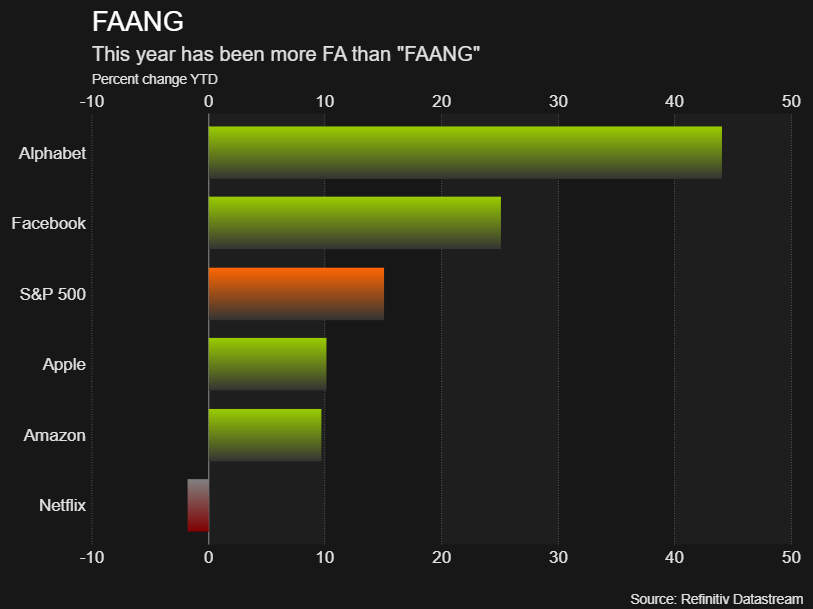 A year late, at empty stadiums in the world's biggest city, the Olympic Games have begun mid-pandemic. Athletes are to compete without mingling, to dine alone and to take their free condoms home. read more

A spectacle that cost some $15.5 billion will bring no tourism, next to no ticket revenue and no economic boon. Intended to showcase Japan's recovery from the devastating 2011 earthquake, the Tokyo Olympics has instead become so toxic that even sponsors such as Toyota (7203.T)have decided to give airwaves and the opening ceremony a wide berth.

Some have found a silver lining in a pre-Games pickup in vaccination rates for Japan, where only 20% of the population is fully inoculated. But for the more than two-thirds who said they don't believe the event can be held safely, it will be a nervous fortnight of hoping the virus is kept behind the sidelines.

Summertime and the living is easy. Not for markets swinging wildly from one direction to another as investors try to decide what the future holds for world growth.

Recent days saw the S&P 500 (.SPX) record its steepest one-day drop in months on concerns that COVID-variants could derail the recovery, only to post the biggest one-day jump since March a day later. Bond market volatility is no less significant -- 10-year Treasury yields tumbled then posted their biggest one-day jump in a month days later.

Data could soothe or exacerbate growth angst. An advanced estimate of U.S. economic growth and a Fed-tracked measure of inflation are out Thursday. On Friday, flash July euro zone inflation and Q2 GDP numbers are released. 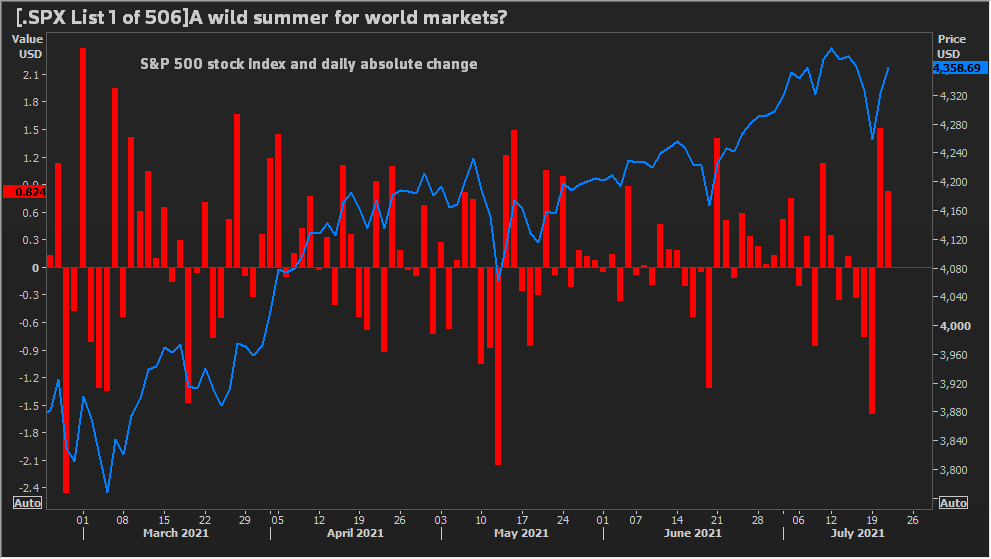 5/ BREAKING UP WITH BUNDS

Europe's banking sector is one of the few industries yet to reclaim pre-pandemic highs. The euro zone bank index (.SX7E) is currently down some 10% from February 2020 and even at the peak of the reflation trade last June it was still 2% away.

By comparison, the pan-European STOXX 600 (.STOXX) is 5% above the levels reached prior to the pre-COVID-19 crash. Despite being the darlings of the reopening trade, European lenders are dragged down by bottom-low interest rates biting into margins.

There is a strong link between their performance and benchmark German 10-year Bund yields . With Deutsche Bank (DBKGn.DE), BNP Paribas (BNPP.PA) and UniCredit (CRDI.MI) reporting in days to come, it might be a good time to break with Bunds. 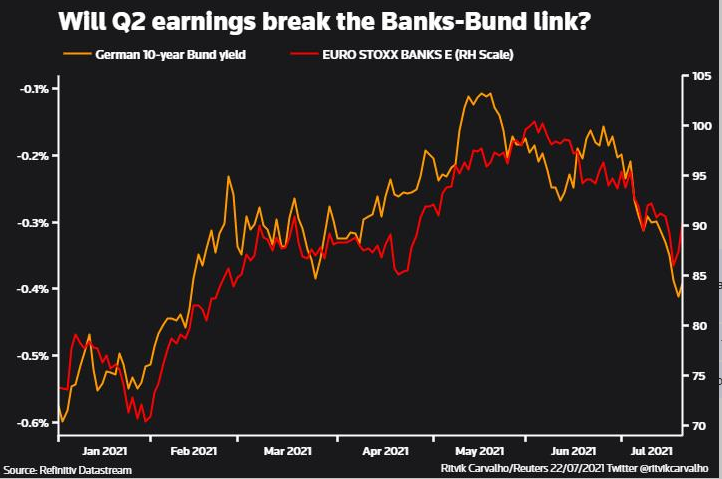