MILAN, May 21 (Reuters) - UniCredit (CRDI.MI) has decided to skip the payment of coupons on some financial instruments, in a U-turn that sent the bond in question into a tailspin and hurt some other debt sold by Italy’s No. 2 bank.

In presenting full-year results in February, Finance Chief Stefano Porro had told analysts the bank expected to pay a coupon on the legacy bond it issued over a decade ago, as well as on Additional Tier 1 bonds.

But a spokesman on Friday said UniCredit would not do so after posting a 2.79 billion euro ($3.4 billion) loss last year.

UniCredit has withheld coupon payments on the CASHES notes in the past after ending the year in the red, but the latest decision, taken by new Chief Executive Andrea Orcel barely a month after his arrival, took bond investors by surprise.

"We review our approach on a regular basis, in particular, with the recent management change, we reviewed it internally and took a decision coherently with our approach in the past and the terms and conditions of CASHES," the spokesman said.

A reported loss is one of the conditions which allow UniCredit to forego payments on the 2.98 billion euro convertible and subordinated hybrid equity-linked securities, dubbed CASHES, issued in 2008 to bolster its capital reserves.

The withheld interest payments amount to 120 million euros for 2021. 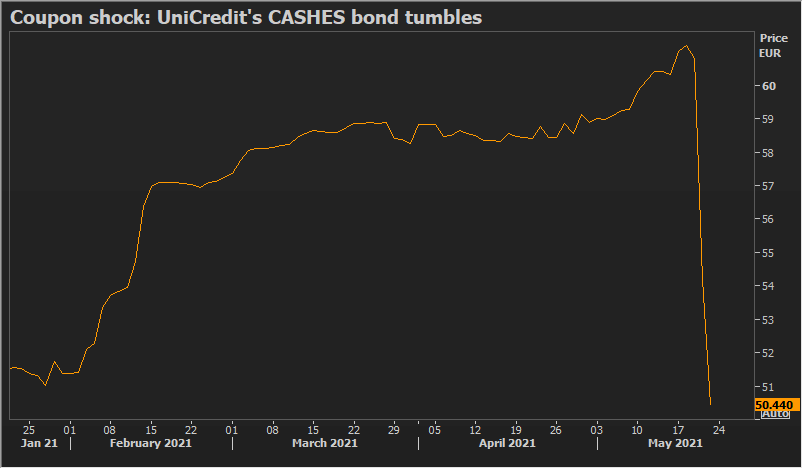 The cash price of the notes traded over the counter fell to 50.47 from 60.83 just two days ago, before the CASHES' fiduciary bank informed investors of the decision, which was first reported by Bloomberg News.

Bond investors have worried since the onset of the COVID-19 crisis that banks may opt not to pay coupons on some debt where they have the option to defer payments.

These fears were fanned by regulatory restrictions on dividend payments, which investors thought might be extended to CoCo bonds as well.

Citi analysts played down the implications of the decision on the CASHES instruments for UniCredit's capital distribution policy.

"While this can be a negative surprise for the CASHES bond holder, this should not affect the bank's ability to pay dividends on 2021 profit nor impact the announced buyback," Citi analysts said in a note.

UniCredit paid out 268 million euros to investors as dividends in April and is currently conducting a share buyback worth 179 million euros which it expects to conclude by the end of September.