A view of the One World Trade Centre tower and the lower Manhattan skyline of New York City at sunrise as seen from Hoboken, New Jersey, U.S., August 9, 2017. REUTERS/Mike Segar

BENGALURU, May 24 (Reuters) - U.S. house prices will continue to race ahead this year, at nearly twice the pace predicted just three months ago, according to a Reuters poll of analysts who said risks to that already upbeat outlook were skewed to the upside.

A strong recovery so far from the pandemic, ultra-low interest rates, massive fiscal support and continued demand for more living space as millions continue to work from home will push house prices higher this year, they said.

The S&P CoreLogic Case-Shiller 20-metro-area house price index has risen at a steady clip since the middle of last year and has averaged over 11% growth so far in 2021.

That measure of U.S. house prices is forecast to outpace GDP growth and consumer inflation - rising at a blistering pace to average 10.6% this year, almost double the 5.7% predicted in February, according to the May 11-24 poll of 40 property analysts.

If realized, it would be the fastest annual house price inflation rate since 2013.

"The housing market is in line with fundamentals as interest rates are attractive and incomes are high due to fiscal stimulus, making debt servicing relatively affordable and allowing buyers to qualify for larger mortgages," said Nathaniel Karp, chief U.S. economist at BBVA.

"Underwriting standards are still strong, so there is little risk of a bubble developing at the moment." 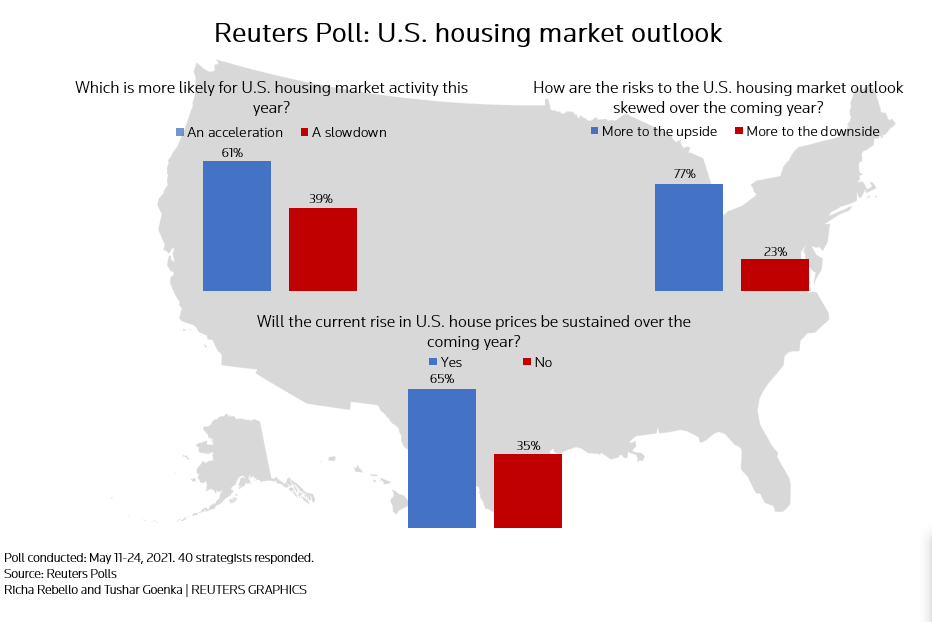 Over three-quarters of analysts, 27 of 35, who answered an additional question said the risk to their outlook was skewed more to the upside over the coming year, while the remaining eight said more to the downside.

When asked if the current pace of price rises would be sustained this year, two-thirds of 34 analysts said yes.

That suggests demand for housing will remain strong on low borrowing costs while a lack of supply squeezes home prices ever higher.

Existing home sales, which make up about 90% of total sales, dropped to a seasonally-adjusted annual rate of 5.85 million units last month, the lowest since June 2020. read more

Home resales were expected to average a little over 6 million units this year, not far from their monthly levels so far this year, but well off the over 7 million units during the previous boom.

When asked to rate U.S. house prices on a scale of 1 to 10 where 1 was extremely cheap and 10 extremely expensive, analysts who in most Reuters polls since 2018 have rated it 7 nudged that median assessment higher in the latest survey to 8.

"Given the strength in demand and the fact there's a record low number of listings in the resale market ... I think affordability will deteriorate over the next year," said Sal Guatieri, a senior economist at BMO Capital Markets.

Still, more than 60% of analysts, or 22 of 36, said an acceleration in U.S. housing market activity was more likely this year. The remaining 14 said a slowdown.

"As we get into later this year and then through next year we will see some cooling in the housing market, slowing in sales and in price growth. The recent price growth is just unsustainable over the long run," added BMO's Guatieri.

(For other stories from the Reuters quarterly housing market polls: