A "Now Hiring" sign advertising jobs at a hand car wash is seen along a street in Miami, Florida, U.S. May 8, 2020. REUTERS/Marco Bello/File Photo

WASHINGTON, July 8 (Reuters) - The number of Americans filing new claims for unemployment benefits rose slightly last week but continuing claims dropped, another indication that the labor market recovery from the COVID-19 pandemic continues to be choppy.

Businesses have reopened at a rapid clip, boosted by a rollback in restrictions now that more than 155 million Americans have been fully vaccinated against the coronavirus. Still, the job market rebound has been anything but steady despite recent employment gains.

Initial claims for state unemployment benefits rose 2,000 to a seasonally adjusted 373,000 for the week ended July 3, the Labor Department said on Thursday. Economists polled by Reuters had forecast 350,000 applications for the latest week.

"Through some of the noise in the data it still looks like the trend for filings keeps moving lower over time," said Daniel Silver, an economist at JPMorgan in New York. 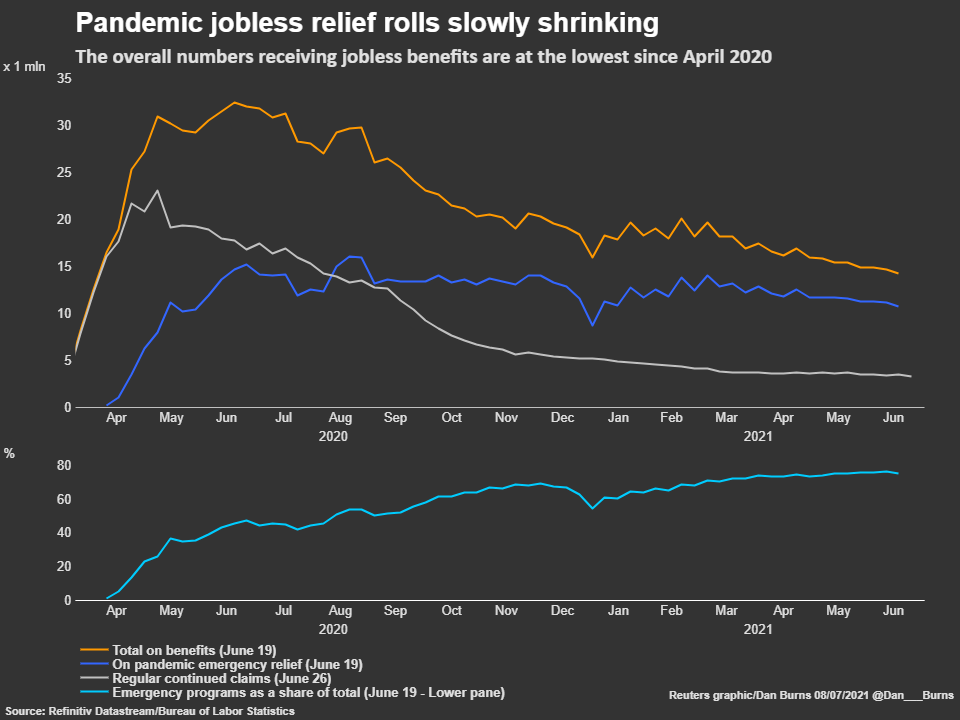 Lack of affordable child care and fears of contracting the coronavirus have been cited for keeping workers, mostly women, at home. There were a record 9.2 million job openings at the end of May and 9.5 million people were officially unemployed in June.

The number of people continuing to receive benefits after an initial week of aid declined 145,000 to 3.339 million during the week ended June 26, the claims report showed. There were 14.2 million people receiving benefits under all programs in late June, a fall from 14.7 million earlier in the month.

The data comes on the heels of an encouraging monthly jobs report from the Labor Department last Friday, which showed U.S. companies hired the most workers in 10 months in June.

The four-week moving average of claims, considered a better measure of labor market trends as it smooths out week-to-week volatility, fell 250 to 394,750.

The claims data may remain volatile in the coming weeks as 25 states with mostly Republican governors pull out of federal government-funded unemployment programs. These included a $300 weekly check, which businesses complained was encouraging the jobless to stay at home.

Those collecting benefits under the Pandemic Unemployment Assistance and Pandemic Emergency Unemployment Compensation programs dropped by nearly 465,000 in the week ended June 19, the largest decline since early May. At a combined 10.7 million, their rolls were the lowest since the start of the year.

The early termination of aid began on June 5 and will run through July 31, when Louisiana, the only one of those states with a Democratic governor, ends the weekly check. For the rest of the country, these benefits will lapse on Sept. 6.

The August slowdown in U.S. job creation hit harder in states that pulled the plug early on enhanced federal unemployment benefits, places where an intense summertime surge of coronavirus cases may have held back the hoped-for job growth.