WASHINGTON, May 6 (Reuters) - The number of Americans filing new claims for unemployment benefits fell below 500,000 last week for the first since the COVID-19 pandemic started more than a year ago, signaling the labor market recovery had entered a new phase amid a booming economy.

That was reinforced by other data on Thursday showing U.S.-based employers in April announced the fewest job cuts in nearly 21 years. The reports added to other upbeat employment data in suggesting that the economy enjoyed another blockbuster month of job growth in April.

But the labor market is not out of the woods yet, with about 16.2 million people still collecting unemployment checks.

Initial claims for state unemployment benefits tumbled 92,000 to a seasonally adjusted 498,000 for the week ended May 1, the Labor Department said. That was the lowest since mid-March 2020, when mandatory shutdowns of nonessential businesses were enforced to slow the first wave of COVID-19 infections.

Economists polled by Reuters had forecast 540,000 applications for the latest week. The decline in claims was led by Virginia, Florida, New York and California. 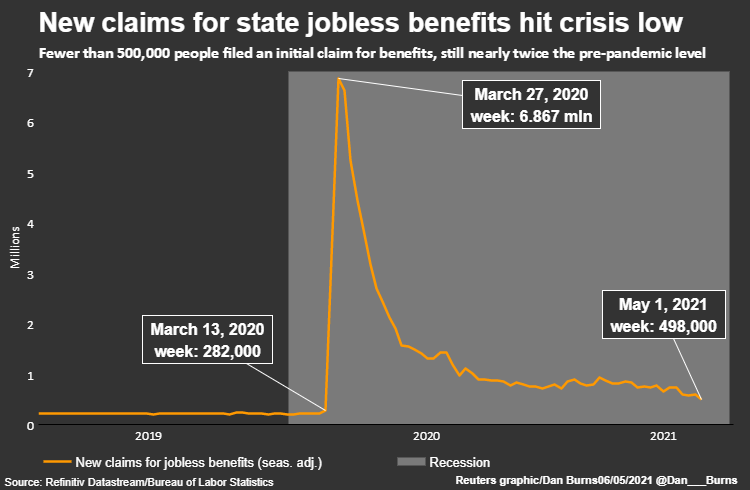 The government has provided nearly $6 trillion in pandemic relief over the past year. Americans over the age of 16 are now eligible to receive the COVID-19 vaccine, leading states like New York, New Jersey and Connecticut to lift most of their coronavirus capacity restrictions on businesses.

The massive fiscal stimulus and rapidly improving public health situation are unleashing pent-up demand, resulting in a scramble for workers by companies.

Reports on Wednesday showed private employers hired the most workers in seven months on April, while a measure of services industry jobs rose to more than a 2-1/2-year high. Consumers' perceptions of the labor market are the strongest in 13 months. 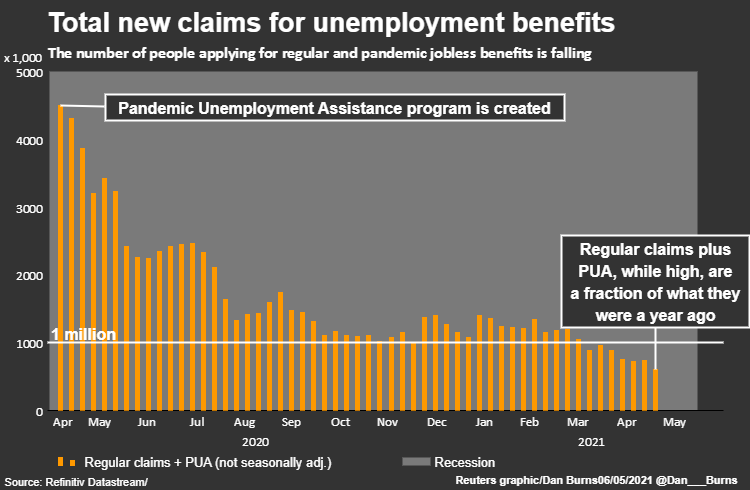 Construction workers wait in line to do a temperature test to return to the job site after lunch, amid the coronavirus disease (COVID-19) outbreak, in the Manhattan borough of New York City, New York, U.S., November 10, 2020. REUTERS/Carlo Allegri/File Photo

In a separate report on Thursday, global outplacement firm Challenger, Gray & Christmas said layoffs announced by U.S.-based employers fell 25% in April to 22,913, the fewest since June 2000. Planned layoffs so far this year are down 84% from the same period in 2020.

According to a Reuters survey of economists, nonfarm payrolls likely increased by 978,000 jobs last month after rising by 916,000 in March. That would leave employment about 7.5 million jobs below its peak in February 2020.

Estimates range from as low as 656,000 to as high as 2.1 million jobs. The Labor Department will publish April's employment report on Friday.

Part of the elevation has been blamed on fraud as well as the enhancement of the unemployment benefits programs, including a weekly $300 subsidy, which could be encouraging some people to attempt to file a claim for assistance, though not every application is approved.

Including a government-funded program for the self-employed, gig workers and others who do not qualify for the regular state programs, 605,884 people filed for claims last week. These benefits and the weekly subsidy end in early September. They have been blamed for worker shortages across many industries.

"The government is paying more to be on the unemployment rolls than the private sector is paying to work at their businesses," said Joel Naroff, chief economist at Naroff Economics in Holland, Pennsylvania. "The choice is clear, at least until the enhanced benefits run out."

The claims report also showed the number of people receiving benefits after an initial week of aid increased 37,000 to 3.690 million in the week ended April 24. About 5.0 million people were on government-funded extended benefits during the week ended April 17. Another 453,653 were on a state program for those who have exhausted their initial six months of aid. 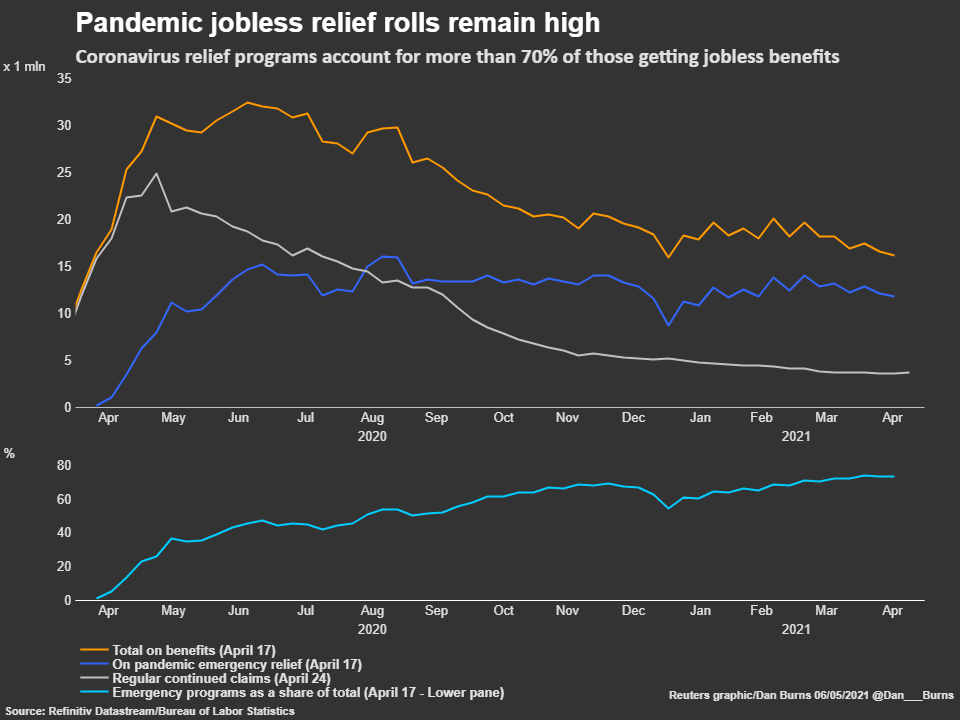 There were 16.2 million people receiving benefits under all programs in mid-April. With economic activity strengthening, worker productivity is rebounding, which should help to protect profits as companies face higher input costs caused by the robust demand and a shortage of materials and labor.

In another report on Thursday, the Labor Department said nonfarm productivity, which measures hourly output per worker, rebounded at a 5.4% annualized rate last quarter. Productivity contracted at a 3.8% rate in the final three months of 2020, the sharpest since the fourth quarter of 1990.

"We expect productivity to strengthen in coming quarters and remain well supported as the economy experiences a mini-boom in activity and the labor market lags the overall economic recovery," said Kathy Bostjancic, chief U.S. financial economist at Oxford Economics in New York.

Gross domestic product is expected to rise above its pre-pandemic level this quarter, while most economists expect a full recovery in employment in the second half of 2022.

U.S. Federal Reserve officials will lay bare how soon and how often they think the economy will need interest rates rises over the next three years when they release new forecasts at their policy meeting on Wednesday, with investors on alert for a faster pace of tightening.

With the focus on a taper, five questions for the Fed