The U.S. economy grew solidly in the second quarter, putting the level of gross domestic product above its pre-pandemic peak, but the pace of GDP growth was slower than economists had expected. read more

Among the latest upbeat earnings news, shares of Ford Motor Co (F.N) jumped 3.8% as the company lifted its profit forecast for the year, while KFC owner Yum Brands Inc (YUM.N) rose 6.3% after it beat expectations for quarterly sales. read more

The day's lower than expected economic data may have calmed a bit of investor angst that the Federal Reserve's "easy money policy" may be going away soon, said Peter Tuz, president of Chase Investment Counsel in Charlottesville, Virginia. Investors also saw "some pretty good earnings today," he said.

Stocks got a boost on Wednesday after the Fed said it was not yet time to start withdrawing its massive monetary stimulus. read more

The Dow and S&P 500 hit intraday record highs early in the session.

On the down side, Facebook Inc (FB.O) shares fell 4% as the company warned revenue growth would "decelerate significantly" following Apple Inc's (AAPL.O) recent update to its iOS operating system that would impact the social media giant's ability to target ads. read more 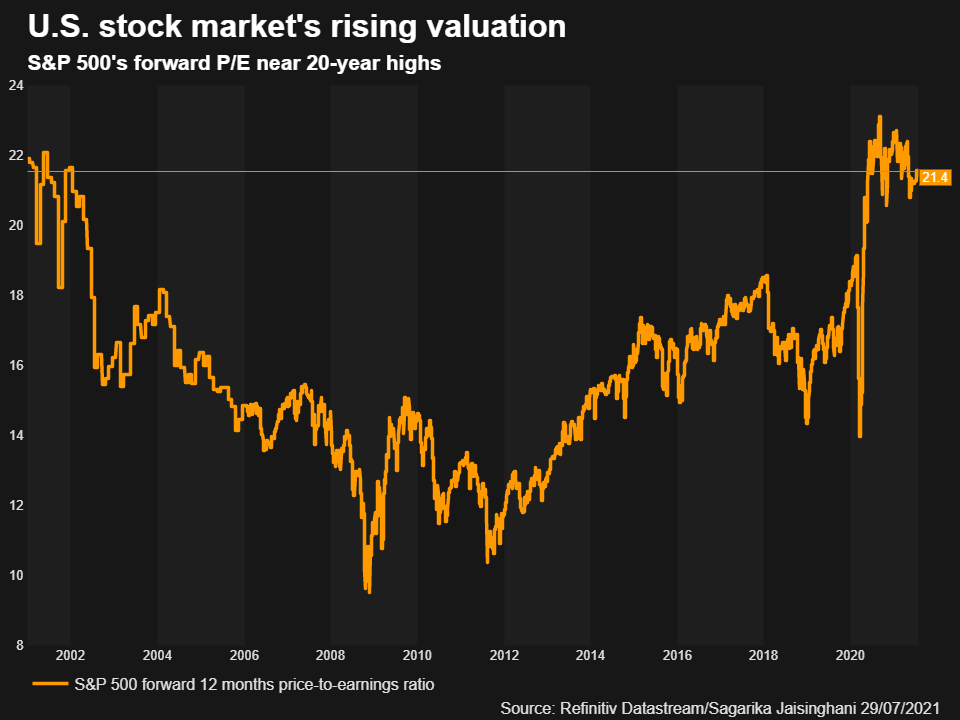 Results were in from about half of the S&P 500 companies as of Thursday morning. Nearly 91% of the reports have beaten profit estimates, and second-quarter earnings now are expected to have jumped 87.2% from a year ago, according to Refinitiv data.

After the bell, shares of Amazon.com Inc (AMZN.O) were down more than 5% after the company reported results and forecast third-quarter sales below Wall Street expectations. read more

During the regular session, Tesla Inc (TSLA.O) jumped 4.7% and was the biggest boost to the S&P 500 (.SPX), followed by Apple, which rose after Wednesday's declines.

Also, shares of Robinhood Markets Inc (HOOD.O), the popular trading app used by many investors to participate in this year's "meme" stock trading frenzy, ended down 8.4% on their first day of trading. read more

With rising inflation and concerns that higher prices would not be as transient as expected, focus on Friday will be on the June reading of the personal consumption expenditures price index.

Volume on U.S. exchanges was 9.13 billion shares, compared with the average of about 9.86 billion for the full session over the last 20 trading days.

Advancing issues outnumbered declining ones on the NYSE by a 2.34-to-1 ratio; on Nasdaq, a 1.22-to-1 ratio favored advancers.

China Evergrande Group appeared to have averted default with a last-minute bond coupon payment, a source said on Friday, buying it another week to wrestle with a debt crisis looming over the world's second-biggest economy.

Walmart's corporate workers to start returning to offices next month