All three major U.S. stock indexes ended the session sharply lower, with the S&P and the Nasdaq suffering their largest one-day percentage drop since mid-May.

The blue-chip Dow had its worst day in nearly nine months.

"Much of it is related to the Delta (variant)," said Paul Nolte, portfolio manager at Kingsview Asset Management in Chicago. "There’s some concern too that maybe the economy is not going to open up as quickly as everyone thinks, and the big boom that everyone’s expecting is going to be more of a pop than a boom."

"We’re woefully off of breakneck economic growth, and judging by the activity we’re seeing we’re overestimating a lot of the economic reports," Nolte added.

The highly contagious COVID-19 Delta variant, now the dominant strain across the globe, has caused a surge in new infections and deaths, nearly exclusively among unvaccinated people.

For an interactive graphic on worldwide vaccine deployment and availability, click here.

"Global availability of the vaccine has been an issue from day one." Nolte said. "That’s been out there for a long time. This is the latest iteration of that. We still have a long way to go."

Travel and leisure stocks plunged, with the S&P 1500 Airline index and the S&P 1500 Hotel and Restaurant index (.SPCOMHRL) losing significantly more ground than the broader market. 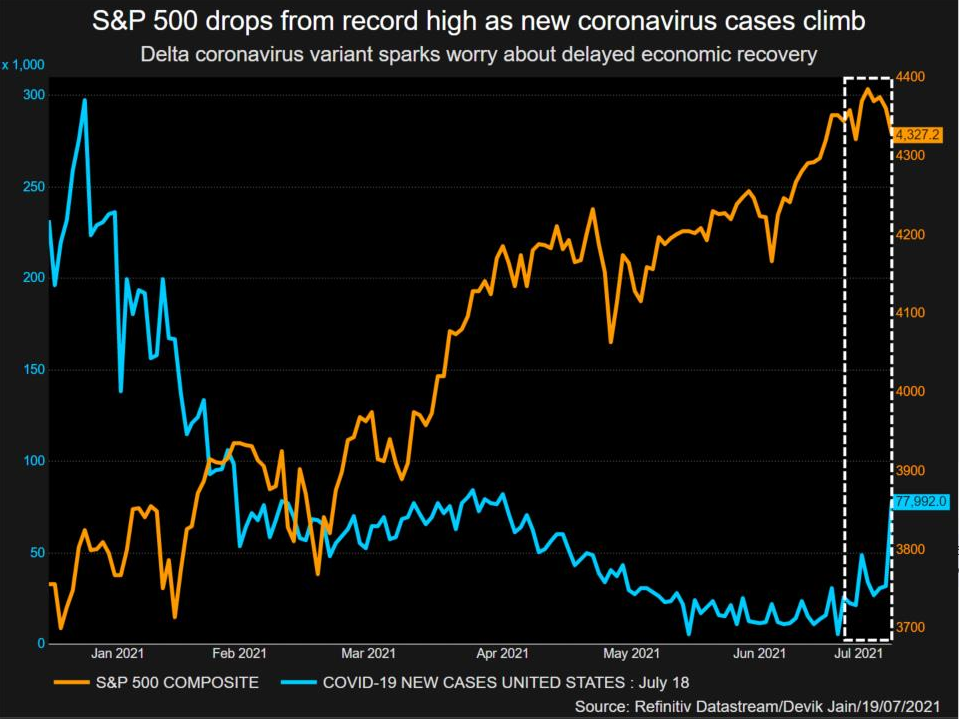 All 11 major sectors in the S&P 500 closed deep in negative territory.

Second-quarter reporting season is under way, with 41 of the companies in the S&P 500 having reported. Of those, 90% have beaten consensus estimates, according to Refinitiv.

Among high-profile names, Netflix (NFLX.O), Twitter , Johnson & Johnson (JNJ.N), United Airlines (UAL.O) and Intel (INTC.O), along with a host of industrials from Honeywell to Harley-Davidson (HOG.N) are due to post results this week.

Analysts now see year-on-year S&P 500 earnings growth of 72% for the April to June period, substantially higher than the 54% annual growth forecast at the beginning of the quarter, per Refinitiv.