LONDON, July 8 (Reuters) - Euro 2020 semi-final victories for England and Italy mean football's either coming home or going to Rome, but the last 20 years show that hoisting the European Championship trophy can also lift a stock market.

Of the last five tournament winners, Greece (.ATG) and Spain's bourses (.IBEX) outperformed the pan-European STOXX 600 (.STOXX) after their 2004 and 2008 and 2012 wins, while only Portugal's 2016 title was followed by notable underperformance.

Perhaps a reflection of the shock of the victory, the Athens market outperformed by an impressive 20% six months on from Greece's win - long before the country's debt crisis kicked off, of course.

The first of Spain's back-to-back wins in 2008 and 2012 came at the height of the global financial crisis, meaning most stock markets were taking a dive, but the Spanish bourse still managed to outperform by losing 5% less than the STOXX 600.

In 2012 it was even more dramatic, coming during the second peak of the euro zone debt crisis and just before then ECB President Mario Draghi had calmed things down by vowing to do "whatever it takes".

That meant Madrid's IBEX initially slumped despite Spain's 4-0 thumping of Italy in the final. But by the end of that year it was back in form and outscoring the STOXX 600 by around 4%. 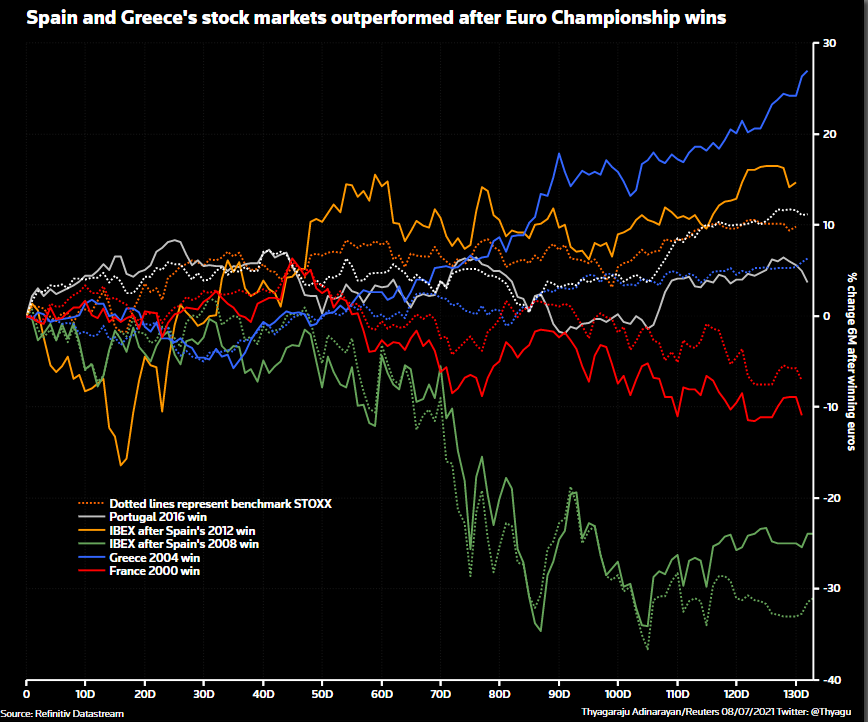 Analysts have looked into this kind of impact before. A study by Goldman Sachs in 2014 showed that every World Cup winner since 1974 had seen its stock market outperform, with the exception of the 2002 tournament when Brazil’s victory was overshadowed by a deep recession.

On average, the victor's local bourse outperformed the global market by 3.5% in the first month after the final. Goldman found though that the boost usually faded over the next three months and by the time the anniversary of the win came around they were underperforming by 4% on average.

So what about this year? Well if it's any consolation for Denmark after Wednesday's semi-final defeat to a soft penalty, Copenhagen's bourse has outscored London's FTSE 100 by nearly 5% since the start of the tournament and beaten Italy and the other losing semi-finalist Spain's market by 6% and 8% respectively.

Deutsche Bank meanwhile pointed out this week that sterling, the currency, has struggled to match the star performances of its England namesake, Raheem Sterling, on the pitch.

Like the player was in Denmark's penalty box on Wednesday, the pound sterling is down in trade-weighted terms since the tournament started, though that's not uncommon when looking at the currency between the start of the last 13 major competitions England have qualified for, and the day after they bowed out.

"There is sadly no correlation between on-pitch performance and returns in currency markets," Deutsche Bank economists said. "Knockout games have also not seen GBP regularly outperform its rivals following victories, nor weaken after defeats." 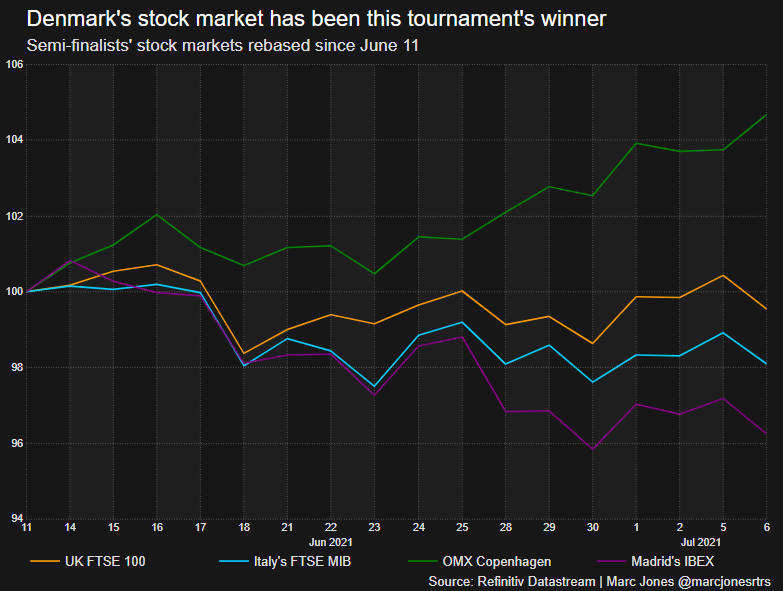