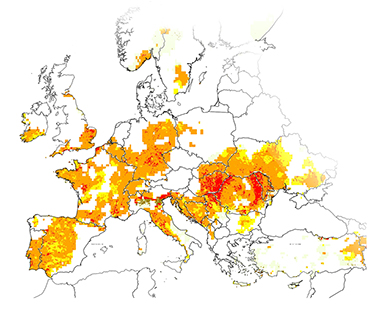 Historic heatwaves and what the European Commission Joint Research Centre has warned could be the worst drought in 500 years are devastating agriculture across Europe and having major consequences on the energy sector, including hydropower generation and power plant cooling systems.

Large parts of Europe are under “warning” or “alert” drought levels, according to the European Drought Observatory, indicating a severe lack of moisture in the soil and heat stress on crops.

The drought has reached a critical point in countries including France, Italy and Portugal, following a drier winter/spring and early summer heatwaves.

The toll on agriculture

A map shows where in Europe’s plants are showing signs of stress as a consequence of drought. Several main locations can be spotted on the map: Hungary, northern Italy and Romania.

The Fraction of Absorbed Photosynthetically Active Radiation (FAPAR) represents the fraction of solar radiation that is absorbed by land vegetation for photosynthesis. The FAPAR Anomaly indicator in the Copernicus Global Drought Observatory (GDO) is used to detect and monitor the effect on vegetation growth and other environmental stress factors, especially stress due to drought.

The drought follows a persistent lack of rainfall across Europe combined with heatwaves in May, June and July. The lack of precipitation makes it harder for plants to extract water from the soil, leading to widespread stress on vegetation — especially, in the north of Italy; in southern, central and western France; in central Germany and eastern Hungary; Portugal and in northern Spain.

European map showing the combined drought indicator, which sets three levels of alert based on the analysis of precipitation, soil moisture and vegetation stress. As of the end of July, large parts of Europe were under one of these categories with <a href="https://joint-research-centre.ec.europa.eu/jrc-news/droughts-europe-july-2022-almost-half-eu-uk-territory-risk-2022-07-18_en">almost half of the EU plus UK territory at risk</a>.

European map showing Land Surface Temperature Anomalies. The map shows how warmer temperatures than usual were registered in western Europe and some southeastern countries such as Bulgaria, Hungary and Romania in July.

Expected yields for both winter and summer crops have been cut in Germany, Hungary, Italy, Poland, Romania, Slovakia, Spain and Ukraine due to drought conditions and heatwaves.

Western Europe experienced a prolonged first heatwave in May, then in mid-June, and again at the beginning of July, with temperatures rising well above normal in most of eastern and northern Europe that month. Those early heatwaves caused further stress on crops and accelerated snowmelt in the Alps.

A map shows the contrast between two neighbouring regions: the Alps, where early snowmelt is accelerating plant growth and the Po valley, where drought is causing stress on vegetation.

In Italy, the Po River basin faces the highest level of drought severity, according to the GDO. A drought emergency has been declared in five Italian regions and water use has been restricted in several Italian cities. Similar measures to restrict water use have been taken in France.

The federation of Italian utility companies, Utilitalia, warned in June that the country's longest river, the Po, was experiencing its worst drought for 70 years, leaving many sections of the vast, northern waterway completely dried up. The drought has meant salt water from the Adriatic sea is flowing back into the sluggish Po, Italy's longest river, doing further damage to crops hit by an early summer heatwave.

A part of the Po valley near Piacenza, Italy, as captured by Copernicus Sentinel-2.

Northern Italian regions risk losing up to half their agricultural output due to drought, as lakes and rivers across much of Italy are running dangerously low.

Other rivers stretching into central Italy were also far lower than normal for this time of year. Farmers in Tuscany, the heart of Italy's prized wine and olive oil industry, are battling to salvage as much as they can of this year's crop from drought and heatwave. A lack of rainfall since spring has even affected plants that traditionally thrive in hot and dry conditions.

Worst drought in France on record

The national weather agency, Meteo France, declared the worst drought in the country since records began in 1958 and expected it to get even worse until at least the middle of August. On average, less than 1 cm of rain fell across France in July.

The drought has left parched villages without safe drinking water and forced them to rely on water deliveries by truck.

The corn harvest is expected to be 18.5% lower this year compared with 2021, the agriculture ministry said, just as Europeans contend with higher food prices as a result of lower-than-normal grain exports from Russia and Ukraine. Meanwhile, a shortage of fodder for cows because of the drought meant there could be a shortage of milk in the months ahead, the National Federation of Farmers' Unions said.

France is the EU’s largest corn grower and its output could fall below the five-year average as more dry and hot weather in the coming weeks hits growing regions.

In Romania, the EU’s second-largest corn producer, the lack of rainfall since spring has started to compromise the yield potential of summer crops, which is expected to be below the five-year average, according to the EU crop monitor.

In Hungary, a region known as Homokhatsag (Sand Ridge), located between Hungary's two main rivers, the Danube and Tisza, grows corn, grain and sunflowers, and usually receives 550-600 millimetres of rain annually. However, data from the Hungarian Meteorological Service shows it received just 120-150 millimetres in the first half of 2022.

Farmers across Hungary have reported "historic" drought damage affecting some 550,000 hectares of land, the ministry of agriculture said in July.

Drought conditions are also affecting energy production. The lack of water has reduced or suspended hydroelectric and thermoelectric power production across Europe.

Energy production from run-of-river plants until the beginning of July was lower than the 2015-2021 average for many European countries, including Italy (-5,039 GWh compared to the average), France (-3,930 GWh) and Portugal (-2,244 GWh). Reservoir levels are also affected in Bulgaria, Montenegro, Norway, Romania, Spain, among others.

A map of Europe shows the percentage difference between the cumulative hydropower run-of-river generation and storage levels for the week 26 of 2022 compared to the 2015-2021 average for the same week.

France’s Nuclear operator EDF last week reduced its power output at a plant in southwestern France due to high river temperatures on the Garonne, and it has issued rolling warnings for reactors along the Rhone river.

The latest data from the ENTSO-E Transparency Platform shows that the generation from run-of-river plants until the beginning of July was lower than the 2015-2012 average for many European countries. A similar situation holds for reservoir levels, with nine out of thirteen countries with hydropower reservoirs experiencing a decrease in levels compared to the same period in previous years.