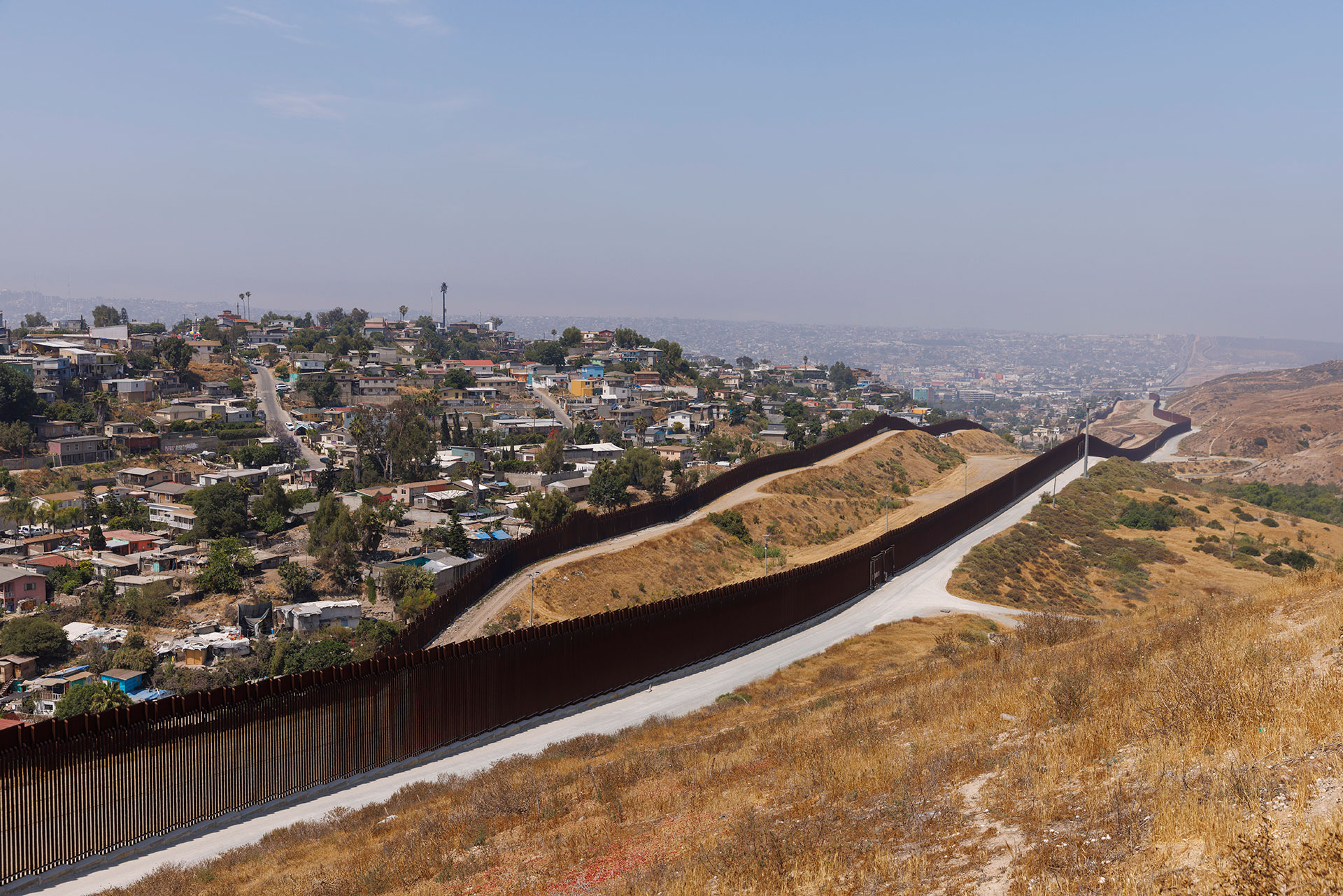 The primary and secondary border walls between the United States and Mexico are shown along the San Diego sector with Tijuana, Mexico in the background looking south west from San Diego, Californian, U.S., June 9, 2022. REUTERS/Mike Blake

From the highways of San Antonio, Texas, where 53 migrants died last month after being packed into a sweltering tractor-trailer, to the currents of the Rio Grande, the unrelenting heat of the desert in Arizona and the wall that former President Donald Trump touted as “unclimbable,” there have been more than 1,000 fatalities on the U.S.-Mexico border since U.S. President Joe Biden took office in January 2021.

From the highways of San Antonio, Texas, where 53 migrants died last month after being packed into a sweltering tractor-trailer, to the currents of the Rio Grande, the unrelenting heat of the desert in Arizona and the wall that former President Donald Trump touted as “just about unclimbable,” there have been more than 1,000 fatalities on the U.S.-Mexico border since U.S. President Joe Biden took office in January 2021.


In the early hours of Friday, May 6, Gerardo Avila and five other migrants scaled the 18-foot U.S. border wall next to a Mexican highway, about a quarter mile west of the Otay Mesa port of entry in San Diego.

Avila had been deported to Mexico a few weeks earlier after three decades in the United States, and was trying to get back to his family for Mother’s Day, relatives said. As he was climbing, bright lights from a border patrol vehicle flashed in the direction of the wall, illuminating the foggy night sky. Agents heard a scream and saw Avila fall about 15 feet, according to a Border Patrol statement, which identified him only as a “male citizen of Mexico.”

Avila, 47, was declared dead at the scene. The others were rushed to hospital.

His death was part of a spike in fatalities along the border, which broke records last year. New data from the United Nations shows the trend is on track to be as bad or worse this year.

Some of the deaths, medical experts and advocates told Reuters, are a legacy of Trump-era policies. The towering wall - built as high as a three-storey building in some sections - has multiplied serious injuries for those who try to scale it. A record number of crossings, more than 1.7 million so far this fiscal year through June, have been fueled in part by an expulsion policy put in place by Trump, a Republican, that Biden, a Democrat, has been unable to end. It cuts off options for requesting asylum, pushing migrants to seek entry multiple times along ever-more-risky clandestine routes. Republicans say Biden’s promise of a more “humane” approach to the border has encouraged migrants to embark on the dangerous journey to the United States in ever greater numbers.

Last year was the deadliest for migrants crossing the border, with 728 fatalities recorded by the United Nations, which started counting in 2014. The U.N. has counted 340 more this year, apace with 2021’s grim record.

U.S. Customs and Border Protection (CBP) acknowledged in a statement “a rise in the number of deaths.” It blamed smuggling organizations “with no regard for human life,” who abandon migrants in remote and dangerous areas.

CBP has not published data on deaths on its website since fiscal year 2020.

Record keeping is patchy. Some migrants who die are never found or identified.

Following congressional mandates, CBP changed how it counts fatalities along the border last year to include only those who die in custody, during arrests or when agents were nearby. The agency told Reuters there were 151 such “CBP-related” deaths in the 2021 fiscal year, a previously unreported number.

Bodies discovered by CBP or others are not currently included in the agency’s data.

Avila’s death, which is being investigated by local and federal authorities, would likely be counted under the new methodology because CBP agents were present when he died. Reuters was unable to establish what caused Avila and the others to fall.

The primary fence Avila fell from doubled in height to 18 feet under Trump, whose campaign rallying cry of “build the wall” launched him to the presidency in 2016. A 30-foot secondary fence was built in the same section.

On one morning in May, Vishal Bansal, Scripps Mercy’s chief of trauma surgery, and his team saw three border patients. Two were recent arrivals with fractures to the lower extremities, another had a head injury, had been unresponsive for weeks and was given a 50/50 chance of survival.

“We have seen a massive uptick in the number of patients since the end of 2021 until now,” Bansal said.  While the hospital attends migrants injured at sea or in crashes after high-speed chases with border patrol, the majority are injured “falling from the border wall,” he said.

The trauma center at Scripps Mercy - where the hills of Tijuana, Mexico are visible out the windows - alternates months with nearby University of California at San Diego (UCSD) Medical Center to receive patients injured while crossing the border.

A UCSD study published by the Journal of the American Medical Association on April 29 found the higher border wall was associated with more deaths and severe injuries as well as increased costs for the hospital. From 2019 to 2021, after the higher wall sections were completed, there were 375 UCSD admissions due to falls, a more than five-fold increase compared to the previous three-year period.

Four of the people injured in the fall on May 6, when Avila died, were rushed to Scripps Mercy, which has recorded 209 border fence falls from 2019 to 2021, up from 43 recorded in the previous three years, according to the data shared with Reuters. In the first five months of this year the hospital received three times more border injury patients than in the same period last year.

One of the recent arrivals, Juan Jesus, 24, had already gone through two operations on his broken lower left leg, and suffered spine and hip injuries after falling from the wall.

Juan Jesus, a truck driver who spoke on condition his last name not be used, said he fled Mexico after suffering multiple armed robberies of his cargo and threats to his family. One night after sundown, he and a friend found a discarded metal ladder on the Mexican side of the border and decided to use it to go over the fence near the Tijuana airport. They cleared the first, shorter fence just fine, Juan Jesus said, reaching U.S. territory. But they still had to scale the second 30-foot barrier, and the ladder was not quite tall enough. As he neared the top, it came away from the wall and he fell, breaking his leg. He lay immobile and in pain, until the Border Patrol arrived and called an ambulance.

Gerardo Avila also took great risks scaling the wall, but unlike Juan Jesus he wasn’t fleeing home, he was trying to get back.

Avila first arrived in the United States as a teenager in 1990, according to court records, coming “through the hills.” He, his mother and nine siblings all settled in the country. He worked in construction and made a life in Perris, California with his wife and five step-children, according to his sister, Elisa Sandoval.

Avila spent years fighting to stay in the country, before losing his final appeal last year. In immigration court, U.S. Immigration and Customs Enforcement prosecutors pointed to a 2006 conviction for driving under the influence and hit and run with injury as a reason his request for leniency should be denied. Avila told the court that he checked on the driver he rear-ended and gave her his insurance information before driving on. He was arrested shortly after leaving the scene, records show, and was sentenced to 20 days in jail and three years probation.

On March 16 of this year, Avila was arrested by a border patrol criminal-targeting team at a Home Depot in Perris and deported through the San Ysidro port of entry that same day.

”He was really desperate to get back,” his sister Sandoval said. Instead, he was buried in California on his 48th birthday.“I think the wall is stupid. Trump is to blame for these deaths,” she said.

Asked about the role of the wall in injuries and deaths, a spokesperson for Trump blamed Biden’s policies for “mayhem” on the southern border.

The road53 dead in a sweltering tractor-trailer in San Antonio

One of Trump’s signature policies that Biden has so far not overturned allows border agents to quickly expel migrants back across the border.

Brothers Mariano, 32, and Begai Santiago, 33, from a tiny village in the southern Mexican state of Oaxaca, where most residents speak the indigenous language of Chinanteco, set out for Atlanta, Georgia for work. They were turned back by U.S. officials twice, but kept trying.

“He told me he was going to try to cross a third and final time,” Mariano’s wife Luz Estrella Cuevas told Reuters.

The third time, they crossed undetected, and then boarded a tractor-trailer packed with dozens of other migrants headed to San Antonio.

Mariano did not make it out alive.

He was one of 53 victims who died locked inside the overheated trailer on the side of a Texas highway on June 27, the most deadly smuggling incident in recent U.S. history.

Begai survived to recover in a San Antonio hospital.

The brothers were identified in part because U.S. authorities had records of their previous crossings.

Migrants have been turned around more than 2 million times since the Trump policy known as Title 42 was put in place in the name of protecting public health in March 2020 at the start of the COVID-19 pandemic, according to U.S. government data.

“Sometimes they are returned and try to cross again the next day,” Garduno told reporters in June.

U.S. immigration authorities said they could not comment on whether the brothers were expelled under Title 42 because the investigation was ongoing.

Montufar first fled central Guatemala in 2018 after an assault left her unconscious for more than a week, her mother, Teresa, said. Montufar set out for the U.S.-Mexico border carrying police reports detailing the assault in the hopes of getting asylum. “They didn’t give her a chance,” Teresa said, “they just deported her.” CBP did not respond to requests for comment on her case.

At the time, the Trump administration was making it harder to seek asylum, arguing that most claims were without merit.

Once home, where her family were subsistence farmers, she was still afraid, Teresa said, and earlier this year, at 23, she tried again.

Around 5 p.m. on September 5,  Montufar called her mother to say she was going to cross the border. The next thing Teresa heard was from a person traveling with Montufar, who said the group left her in the desert after she was too weak to continue. He had her phone and some rosary beads, a parting gift from her mother. Relatives in Arizona went to search for her, Teresa said, but it was too late. Her skeletal remains were discovered on Sept. 16 on Tohono Oodham Nation land, according to data from local medical examiners collected by the Arizona-based Humane Borders initiative. Her cause of death was logged as undetermined, the Pima County medical examiner’s office said.

In 2021, 225 deceased migrants were found along Arizona's some 400-mile long border with Mexico, data from Humane Borders shows, the most since the earliest record kept in 1981.

Rescues by border agents along the southwest border have topped 14,000 since the start of the 2022 fiscal year, more than recorded for the full 2021 fiscal year.

Border Patrol Agent Jesus Vasavilbaso said emergency calls in the Tucson sector were up more than 25 percent compared to the same period last year. “We are receiving approximately 16 calls a day,” he said. “Every single day.”

Teresa said their family paid thousands of dollars for the trip, but the smugglers stopped answering calls after her daughter went missing. “They wash their hands of it, they leave people like they were worth nothing,” she said.