Shortly after the news of NBA great Kobe Bryant dying in a helicopter crash in California on January 26, 2019, videos began to circulate claiming to show the moment of the crash. The dramatic video is still visible on some platforms (now deleted on other platforms) shows a helicopter spiraling into some hills and bursting into flames. Here is some of Reuters’ coverage of the accident. 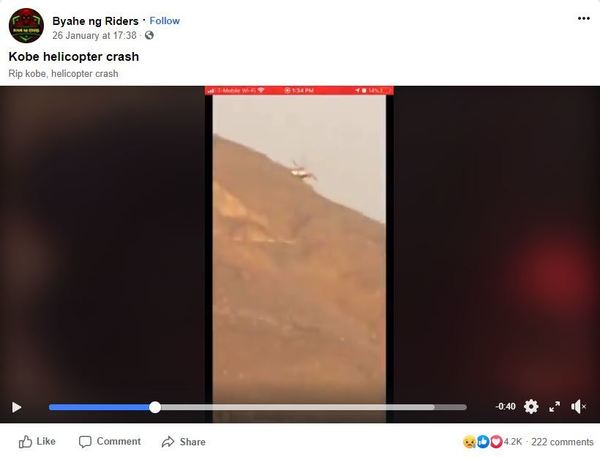 English audio can be heard, and the hills are not too unlike those in California. However, the video is very low quality and appears to be zoomed in. That is because the video is a scrape. The video circulating is a cropped version of this helicopter crash, that happened in Jebel Jais in Ras Al Khaimah, UAE in December 2018.

The video is therefore false, it is an old video cropped and wrongly titled footage of Kobe Bryant’s fatal crash. 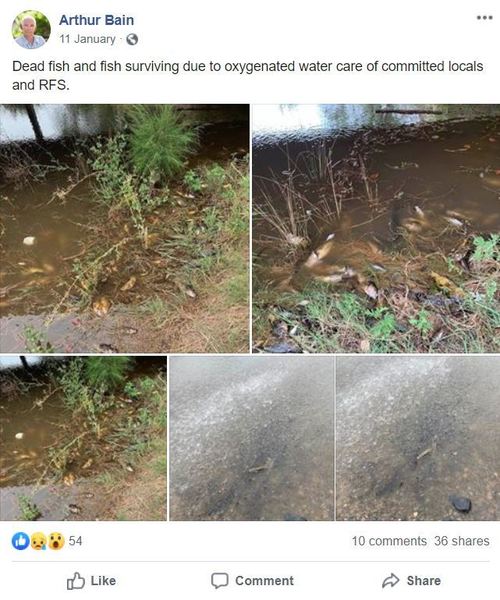 The Facebook user, who is a founding member of the local green party, told Reuters the pictures were taken on January 11, 2020. He also shared a video he said was taken on the same date. The Department of Primary Industries for News South Wales lists fish kills in the region here. The source gave the location in the imagery as Macleay River at the Bellbrook bridge. This location matches one of the entries in the table, with January 10, 2020 given as the start date for observation of the fish kill. Another video and pictures posted to Facebook by different users show the same scene on what they say was January 12, indicating that the situation was observable for a number of days.
The landmarks in the video are consistent with the Google Street View imagery showing from Bellbrook bridge, as seen here.
The NSW fish kill list states that the dead fish observed upstream and downstream of Bellbrook bridge are likely due to rain that moved mud and ash from bushfires through the river system, resulting in a drop in dissolved oxygen levels for native fish.

The photographs are therefore real, as verified by the details relating to the source, content and location.

Video of Iranian missiles landing in proximity of Ain al-Asad air base, Iraq

A video claims to shows Iranian missiles landing in proximity of Ain al-Asad air base, Iraq on January 8, 2020.

January 8, 2020: video shows strikes on Ain al-Asad base in Iraq from Reuters Fact Check on Vimeo.

At 2243 GMT on Jan 7, Reuters published this tweet which stated that a US official claimed rockets had been fired at al-Asad airbase in Iraq. Searches on Instagram soon afterwards led us to a source who had posted a series of video clips on Instagram stories said to show the falling missiles. For security reasons, we are withholding the details of this account. Audio could be heard over the clips, the speech identifiable as saying: “Ain al-Asad base is being struck.” These videos were posted on Instagram within an hour of the Reuters snap. The source gave the time of filming as 0120 local (2220 GMT). No earlier versions of these clips could be located online.

The source told Reuters the position of filming was 2km from the al-Asad air base. In the video, 7 seconds elapse between the white flash of the missile landing and the first audible explosion captured by the videographer. This is consistent with the gap expected at such a distance between a visible occurrence and its associated sound, due to differences in the speed of travel. The name of the base is mentioned several times in the narration to the video, and there is nothing to suggest it has been added in post-production.

The source provided Reuters with full-resolution source files, which removed the filter added to them in Instagram. The videos were consistent in quality, resolution and vantage point. Meanwhile, later Reuters reports quoted US authorities, who said 11 of them hit al-Asad. We therefore conclude that the videos supplied to Reuters show this attack taking place.

Dramatic video from New South Wales showed a family running from the Australia bushfires as flames engulfed their home. The short (3 seconds) but powerful video was posted on Twitter here.
The length of the video was surprising, but the Twitter user who posted it told Reuters it was filmed by her daughter while she was calling rescue services. She also later tweeted a photograph of the house they were staying from earlier that day – where the deck and surrounding trees match the video. 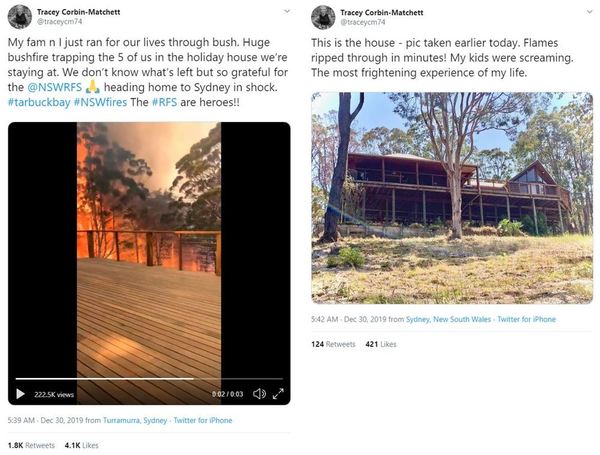 The Twitter user described the location as Tarbuck Bay, New South Wales. A property matching this description, with an additional corroborating image, can be found on holiday rental websites. Property details are no longer available – unsurprising given the extend of the fire destruction.

In a post to the local Pacific Palms Rural Fire Brigade Facebook page, the Twitter user posted further imagery and a note of thanks to the firefighters. In a reply they wrote: "Your welcome that's what we are trained to do , protect life first , property then other , glad u guys are ok , it's pretty hectic in a moment [like you] experienced but that's what we do driveway to driveway, glad we could help you guys that's our biggest reward". 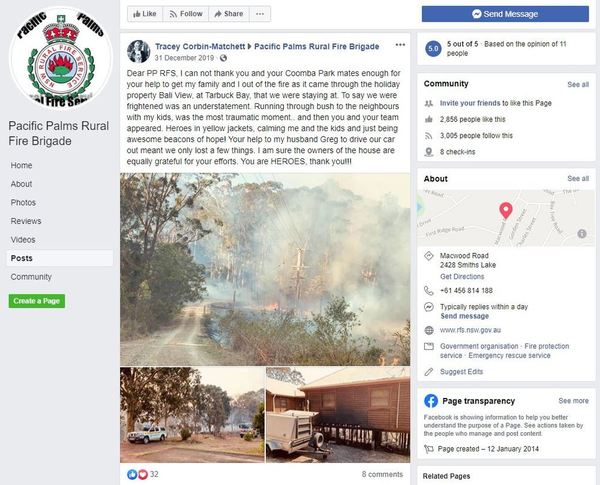 The dramatic video posted by Tracey Corbin-Matchett is therefore a true depiction of a family escaping from Australia's bushfires.

A video showing efforts to contain a fuel spill in the Galapagos Islands was posted to a Facebook group here.

On December 22, 2019 the verified Twitter account @parquegalapagos tweeted that a barge named Orca had sunk, with 600 gallons of diesel on board. Barriers and absorbent pads were being placed to reduce the risk of environmental damage, it added.

Three pictures of the scene accompanied the text. In one of the pictures, a container ship can be seen in the background, and the same craft can be seen in a few frames of the Facebook video:

The user who posted the video to Facebook told Reuters that he worked on a boat, and had seen the scene unfold, so started filming.

The @parquegalapagos tweet gives the location as #SanCristobal – or San Cristobal island. The Twitter account @ECU911Galapago, which has previously had tweets retweeted by the verified @911ECU_ emergency services account, implying that it is authentic, posted a security camera image of the scene, which identifies the precise location as “MUELLE PEDRIAL“ or the La Pedrial dock.

As well as the information provided by the national park, the Ecuadorian environment minister Raúl Ledesma Huerta retweeted the @parquegalapagos tweet and added that immediate action would be taken to reduce the risk to the environment. The environmental group SOS Galapagos tweeted that it wished to see the fuel logistics operation moved to another site.

A video circulating on social media claimed to show police firing at protesters around New Delhi’s Jamia Millia University during protests in December 2019. 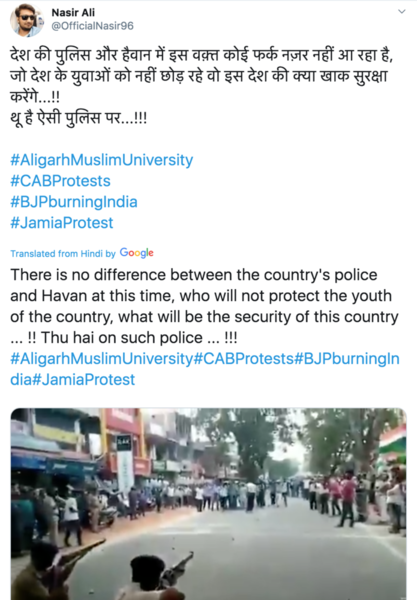 Reverse image search of keyframes from this video led to earlier versions on YouTube. The earliest appears to be here, dates November 2017: 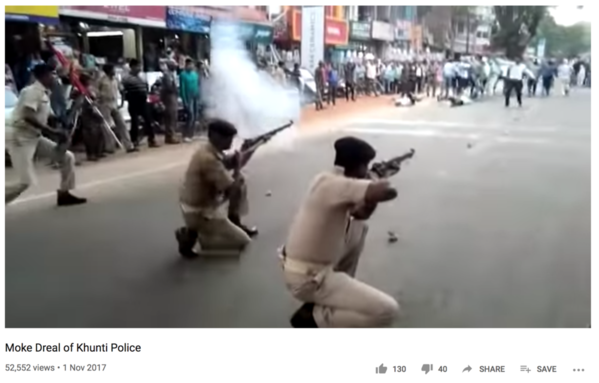 A business called Jagdamba Steel is visible in the video. This business can be located on Google maps in Khunti, the location stated in the YouTube caption. Satellite imagery shows the same street and vegetation pattern visible in the video.
The description on the earliest YouTube video link describes it as a mock drill by local police. A further video posted to YouTube, also in November 2017, shows the same scene from a different angle. It too describes the scene as a rehearsal.

A video shared online showed women forming a human shield around their friend in an effort to prevent him from being beaten by police in New Delhi amidst protests in the Indian city.

Images captured by a Reuters camera at the scene on the same date provide corroboration, as the same individuals are seen here: 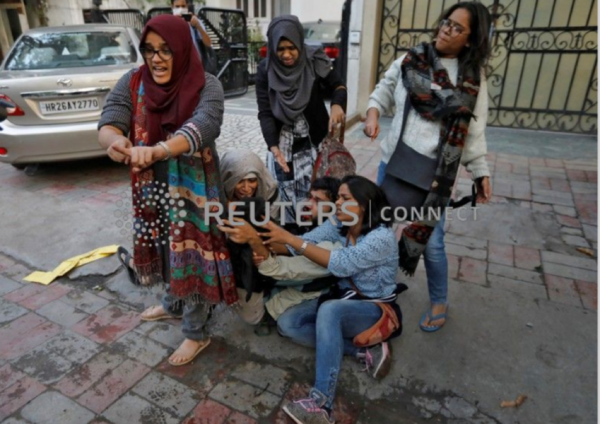 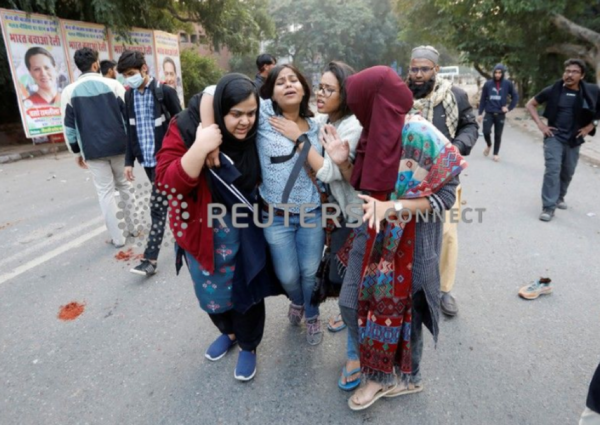 The source of the video reports the location of filming as Mata Mandir road, New Friends Colony, New Delhi. This tallies with other videos of protesters posted on this date, such as this one – which is said to show the same street.

One of the women who appears in the video described the incident in depth to Reuters. She explained she was concerned about protecting her female friend, who had breathing difficulties, and her male friend, who was trying to provide medical assistance, at the time the police attacked. This article in India Today provides a response from the police regarding the wider day’s protesting. The Delhi Police Public Relations Officer MS Randhawa, is quoted as saying the force used "maximum restraint, minimum force" despite being "provoked" by protesters.

A video posted by an Instagram user (his Instagram stories have now expired) showed loud shots during shooting in Jersey City, New Jersey. Videos sent as attachments, inserted below.

Reuters reported on a shooting incident in Jersey City on December 10, 2019, quoting local police.
The uploader shared the filming location with Reuters, which matched local media reports. Google Streetview imagery tallies with landmarks visible in the video frames. Here the blue awning over the shop is identifiable: 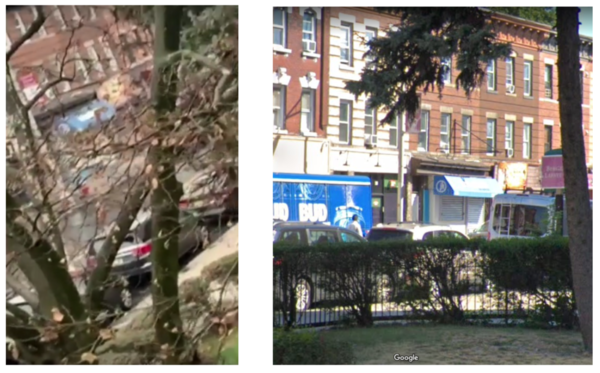 The videos show a consistent vantage point. The source shared details of the experience, which he found traumatic, via a direct message conversation. The prolonged firing audible in the video is aligned with that in clips posted by a local journalist on Twitter.

Images on Facebook showed a Senegalese migrant saving a disabled neighbour from a fire in Denia, Spain. Pictures were posted to Facebook here. 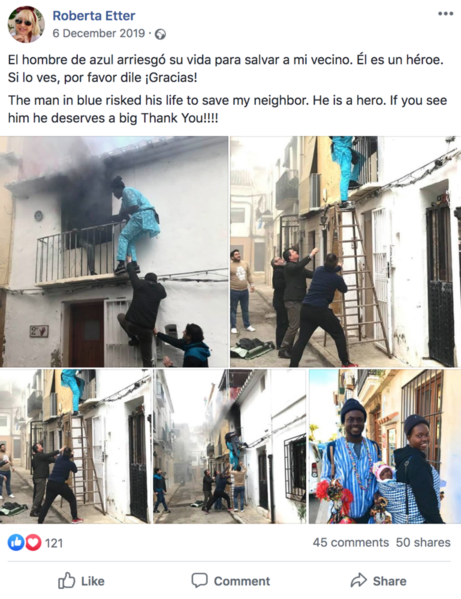 Reuters spoke to the individual who posted the pictures. She confirmed she had taken them herself, on the day she had posted them – December 6, 2019. The local newspaper Levante reported on this incident on the same day. The street visible in this set of pictures can be matched to Google Streetview imagery. Reuters also spoke via phone to the source of the pictures, who gave extensive information about her neighbor, who was rescued, and about the actions of the man who pulled him out of the burning property. The source had a personal website listing her place of residence as Denia. The information she provided tallies with that reported by the Spanish newspaper El Mundo, quoting the region’s Councillor for Citizen Protection, Javier Scotto di Tella Manresa.

Video of London Bridge attacker being apprehended by public

A video showing the London Bridge knife attacker being apprehended by members of the public was posted to Twitter here.

Reuters spoke to the users of the account that posted the video. They shared a screenshot of their camera roll, where the video file had a timestamp of 14:01. This is consistent with the timing reported by Reuters.

In the above screenshot, the video file is seen geotagged to the location on London Bridge and the building to the left of the video frame is easily identifiable as the Fishmongers Hall. The scene, location and time on the video matches early Reuters reports regarding the incident. The same scene is visible in another clip that was posted to social media on the same afternoon.
for-phone-onlyfor-tablet-portrait-upfor-tablet-landscape-upfor-desktop-upfor-wide-desktop-up