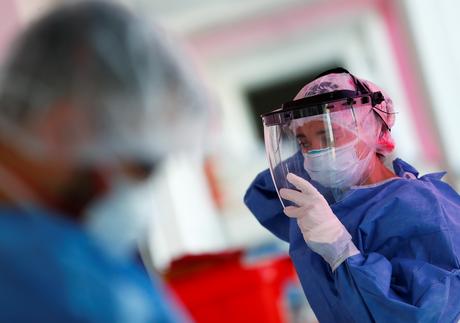 BUENOS AIRES Argentina has become the fifth country with more than 1 million coronavirus cases, its Health Ministry and a Reuters tally confirmed on Monday, making it the smallest nation by far to reach the grim milestone after infections accelerated in recent weeks.

BUENOS AIRES Argentina has become the fifth country in the world to exceed one million coronavirus cases, its health ministry said on Monday, making it the smallest nation by far to reach the grim milestone after infections accelerated in recent weeks.

BUENOS AIRES Argentina surpassed 900,000 cases of coronavirus on Monday, with strong growth of infections in large populated centers in the interior of the country after months of the virus' being concentrated in Buenos Aires and its suburbs.

WASHINGTON International Monetary Fund staff had productive meetings with Argentine authorities during an in-person visit and will return in mid-November to initiate discussions on a new IMF-supported program, the IMF said in a statement on Monday.

BUENOS AIRES Argentina's economy is set to contract by 11.8% in 2020, a slightly rosier outlook than a previous estimate of a 12.1% drop, according to a central bank survey of economists and analysts on Friday.

BUENOS AIRES Argentina will approve the commercialization of HB4 drought-resistant GMO wheat by biotechnology firm Bioceres SA, according to a government document seen by Reuters that is expected to be published in the official gazette on Thursday.

BUENOS AIRES Former Argentine soccer player Diego Maradona tested negative for COVID-19 on Monday, allaying fears he had contacted the virus after hugging a colleague who was later found to have tested positive, his lawyer said on Monday.

BUENOS AIRES Argentina has the world's highest rate of positive COVID-19 tests, according to Oxford-linked tracker Our World In Data, with nearly six out of 10 yielding an infection, a reflection of low testing levels and loose enforcement of lockdown rules.

U.S. borders with Canada, Mexico to stay closed to non-essential travel until Nov. 21

WASHINGTON/OTTAWA The United States' land borders between Canada and Mexico will remain closed to all non-essential travel until Nov. 21, the U.S. Homeland Security Department said Monday.