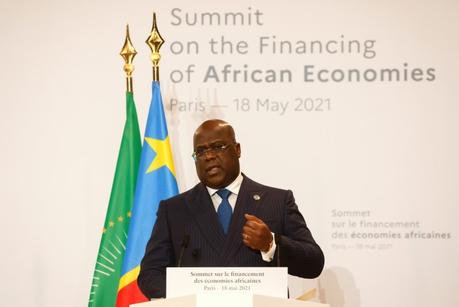 KINSHASA Hospitals in Democratic Republic of Congo's capital Kinshasa are "overwhelmed" by a rise in COVID-19 infections, President Felix Tshisekedi said on Saturday, as the country was hit by a third wave of the disease.

KINSHASA Park rangers in eastern Democratic Republic of Congo have arrested a militia leader and alleged ivory trafficker whose fighters are accused of killing 19 rangers, authorities said on Thursday.

U.N. staffer investigated in Italy over death of ambassador - source

ROME A United Nations employee has been placed under investigation by Italian prosecutors looking into the murder of Italy's ambassador to the Democratic Republic of the Congo and two other people, a judicial source said on Wednesday.

Congo to begin phased return of residents to volcano-hit city

KINSHASA Researchers at an eastern Congolese volcano observatory on Saturday said they could have predicted the deadly eruption of Mount Nyiragongo in May if their work had not been impeded by alleged mismanagement and embezzlement.

KINSHASA Democratic Republic of Congo is facing a third wave of coronavirus infections, with its epicentre in the capital, Kinshasa, one of Africa's most-populous cities, Health Minister Jean-Jacques Mbungani said on Thursday.

KINSHASA (Reuters) -Democratic Republic of Congo on Thursday signed a $100 million solar-hybrid power deal with a consortium led by Gridworks, to provide electricity to half a million people across three cities that have no grid connection.

Ivanhoe Mines said on Wednesday its copper mining joint venture in the Democratic Republic of Congo, which started production last week, had signed a 10-year deal to process some of its copper concentrate at a nearby smelter.

BENI, Democratic Republic of Congo (Reuters) -At least 55 people were killed overnight in two attacks on villages in eastern Congo, the United Nations said on Monday, in potentially the worst night of violence the area has seen in at least four years.

LIMA Peruvians were still waiting on Monday for their next president to be confirmed, more than a week after a polarizing run-off vote, with socialist Pedro Castillo clinging to a narrow lead that would tilt the country firmly to the left.