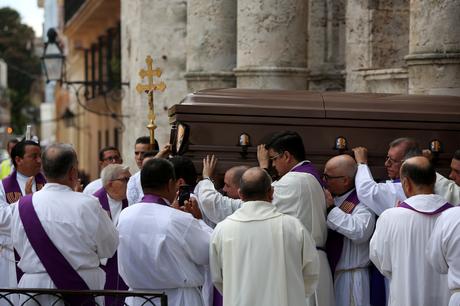 HAVANA Cuban government and Communist Party officials attended funeral services for Roman Catholic Cardinal Jaime Ortega on Sunday in a testament to his success in elevating the Church's position on the Caribbean island after the fall of the Soviet Union.

HAVANA Roman Catholic Cardinal Jaime Ortega, who came to leverage a rare level of political influence in Cuba for someone outside the Communist Party and played a key role in the island's now-defunct detente with the United States, died on Friday at the age of 82.

Dominican Republic sends McAfee to Britain, without guns or yacht

SANTO DOMINGO Tech guru John McAfee, creator of the eponymous antivirus computer software, has arrived in Britain from the Dominican Republic, where he was detained with his wife for entering the Caribbean nation with firearms on his yacht, his lawyer said on Friday.

(This July 19 story corrects to show academy does not belong to Garcia.)

HAVANA Cuban authorities sought to reassure jittery citizens this week that recent power outages and a fuel shortage were due to temporary problems that were being fixed rather than a broader decline in the economy under heavier U.S. sanctions.

Cuba, with one of highest inmate populations, pardons 2,604

HAVANA Communist-run Cuba, which has one of the highest incarceration rates in the world, has pardoned 2,604 convicts, state-run media reported on Friday, without releasing a list of those pardoned.

CIUDAD JUAREZ Number 12,026 - better known as Marcial Artigas, 33, from Holguin, Cuba - waited nervously at a migration office at the U.S.-Mexico border as a Mexican official called out numbers from a long list of hopefuls waiting to cross to the United States.

HAVANA Cuba's first new train passenger cars in more than four decades set off on their maiden journey across the island on Saturday in what the government hopes will prove a total revamp of its decrepit railway system with help from allies Russia and China.

HAVANA Communist-run Cuba put on a brave face Saturday at a mid-year session of the National Assembly, the government insisting it would not let a growing financial crisis and mounting pressure from the administration of President Donald Trump thwart development.

HAVANA Communist-run Cuba passed a new electoral law on Saturday that restructures governance including creating the role of prime minister and provincial governors while retaining the one-party system.

Security forces fired rubber bullets and tear gas to break up anti-junta protests in Myanmar on Wednesday and several people were hurt, media reported, a day after a regional diplomatic push to end the month-long crisis made little headway.