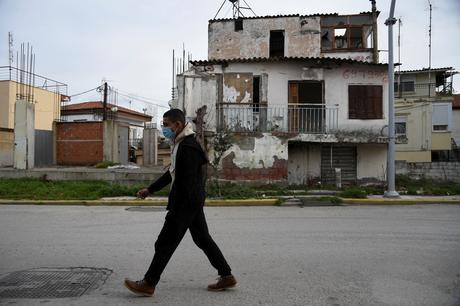 ATHENS Greece said on Wednesday it would end the mandatory wearing of face masks in airplanes and indoor public venues from June 1, as it lifts restrictions imposed to curb the spread of COVID-19 ahead of the summer, its peak tourism season.

LONDON (Reuters) -Greenpeace protesters have blocked the entry of a Greek tanker into a southern English port due to its Russian fuel cargo with police making arrests, the green group said on Monday, drawing condemnation from the British government.

LONDON The rise in European bond yields is alarming some economists, who warn that Italy and Greece in particular do not have much wiggle room before their debt servicing burden starts rising, rekindling memories of the 2011-2012 euro debt crisis.

Pandemic pushes Spanish workers out of the shadows

MADRID/ROME For decades, a cash-filled envelope - or "sobre" - was how hundreds of thousands of Spaniards working without legal contracts in tourism, agriculture or construction collected their salaries.

ATHENS Metro trains ground to a halt and ships were docked in ports as thousands of workers joined May Day rallies in the Greek capital to protest against soaring energy and food prices.

ATHENS A Greek prosecutor said on Thursday she had begun an investigation into an allegation by a journalist that his smartphone had been infected by surveillance software in an operation by the country's intelligence service.

ATHENS Greece will raise the minimum wage from May 1 for a second time this year, Prime Minister Kyriakos Mitsotakis said on Wednesday as rising inflation takes a toll on household incomes.

ATHENS (Reuters) -Greece has impounded a Russian oil tanker off the island of Evia, the Greek coastguard said on Tuesday, as part of European Union sanctions imposed on Moscow over its invasion of Ukraine.

After flying to Greece on a glider, two Turks face deportation

ATHENS Two Turkish citizens who flew from Turkey to Greece in a motor glider that fell in the sea off the Greek island of Evia late Saturday have been arrested and face deportation, government officials said on Monday.