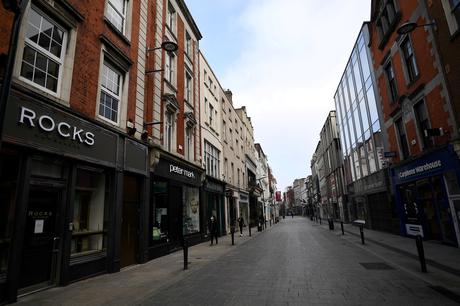 DUBLIN Ireland is considering restarting its mandatory hotel quarantine regime after it told residents to avoid non-essential travel to seven southern African countries due to concerns over a new COVID-19 variant, its health minister said on Friday.

UK says 'significant gap' with EU over N.Ireland, ready to use Article 16

LONDON Britain's Brexit minister said a "significant gap" remained in talks with the European Commission over trade with Northern Ireland, and it was ready to take unilateral action if needed.

ADDIS ABABA (Reuters) -Ethiopia's government has asked the United States to stop spreading falsehoods against the country, the state minister of communication said on Thursday, after the U.S. State Department issued an alert about potential "terrorist attacks".

DUBLIN Ireland believes there is a "window of opportunity" for Britain and the European Union to reach agreement on Northern Ireland trade rules and avoid a damaging trade war, but more trust is needed, Foreign Minister Simon Coveney said on Wednesday.

ADDIS ABABA Ethiopia has expelled four of six Irish diplomats from the country because of Ireland's stance on the conflict there, Irish Foreign Minister Simon Coveney said on Wednesday.

"Come to your senses", Germany urges Britain on N.Ireland

BRUSSELS Germany urged Britain on Tuesday to come to its senses by respecting its commitments under the Brexit divorce agreement with the European Union and resolve differences over Northern Ireland.

LONDON (Reuters) -Progress was made on Friday in talks between the European Union and Britain on post-Brexit trade issues affecting Northern Ireland and solutions can be found if London redoubles its efforts, the EU official in charge of the talks said on Sunday.

DUBLIN A senior British minister said on Friday that he was confident London could break an impasse with the EU over post-Brexit trade arrangements for Northern Ireland without having to trigger emergency measures to safeguard the movement of goods.

LONDON British retailer Marks & Spencer warned the UK government on Wednesday that proposals set out by the European Union to ease the transit of goods to Northern Ireland risked increasing the administrative burden rather than reducing it.

Ireland looks to seaweed in quest to curb methane from cows

ATHENRY, Ireland Scientists are combing Ireland's west coast for seaweed to feed to cattle and sheep after research showed it could stop them breathing out so much climate-warming methane. | Video

HONG KONG/SYDNEY The chief executive of drugmaker Moderna set off fresh alarm bells in financial markets on Tuesday with a warning that existing COVID-19 vaccines would be less effective against the Omicron variant than they have been against the Delta variant.