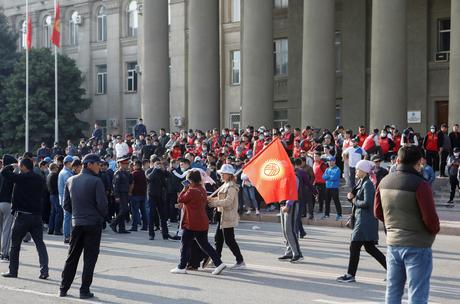 BISHKEK (Reuters) -Kyrgyzstan and Tajikistan agreed what they called a complete ceasefire on Saturday after reports of fresh shooting and troop build-ups in the aftermath of border clashes earlier this week that killed 49 people.

WASHINGTON Most U.S. visa applicants who were denied because of former President Donald Trump's travel ban on 13 mostly Muslim-majority and African countries can seek new decisions or submit new applications, the State Department said on Monday.

BISHKEK Nationalist politician Sadyr Japarov won a landslide victory on Sunday in Kyrgyzstan's snap presidential election, which was triggered by the collapse of the previous government.

WASHINGTON His first big assignment was working at former President Barack Obama’s inauguration in 2009. Officer Brian Sicknick had just been sworn in with the U.S. Capitol Police Department, fulfilling a lifelong dream.

Microsoft disables most of cybercriminals' control over massive computer network

SAN FRANCISCO Microsoft Corp said on Tuesday it had disabled more than 90% of the machines used by a gang of Russian-speaking cyber criminals to control a massive network of computers with a potential to disrupt the U.S. election.

BISHKEK Kyrgyz President Sooronbai Jeenbekov resigned on Thursday, leaving power in the hands of a nationalist rival whose supporters freed him from jail last week. | Video

Kyrgyzstan's president resigned on Thursday after days of unrest following a disputed election, becoming the country's third leader to be toppled in a popular uprising since 2005.

BISHKEK Kyrgyz President Sooronbai Jeenbekov accepted the appointment on Wednesday of a political opponent as prime minister, but immediately defied him by refusing to step down until a new election could be held following a popular uprising.

DUSHANBE Tajikistan's Russian-allied President Imomali Rakhmon looks sure to secure a fifth term in office in Sunday's election as his four competitors' campaigns admit they do not expect many votes.