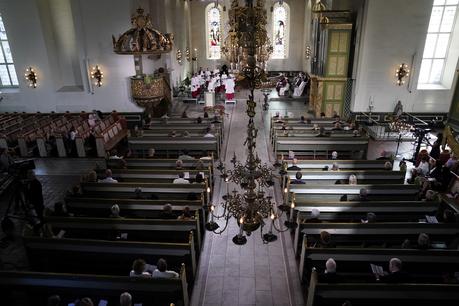 OSLO (Reuters) -Church bells rang out across Norway on Thursday to mark 10 years since Anders Behring Breivik, a far right extremist, killed 77 people, most of them teenagers at a youth camp.

UTOEYA, Norway Norway will next week mark the tenth anniversary of the killing of 77 people by anti-immigrant extremist Anders Behring Breivik in the worst act of violence in the Nordic country since World War Two.

CARACAS (Reuters) -Venezuelan prosecutors on Monday said they had charged opposition politician Freddy Guevara with terrorism and treason, among other allegations, after the country's intelligence service arrested him from his car on a Caracas highway.

OSLO Shell will join a project in Norway to produce hydrogen from natural gas while capturing the emissions, Aker Clean Hydrogen (ACH) said on Monday.

OSLO Norwegian telecoms firm Telenor has sold its Myanmar business, blaming the difficulties of operating under the military junta and dealing a blow to activists who say they relied on the only Western operator for communications.

OSLO (Reuters) -Norway's largest pension fund KLP said on Monday it would no longer invest in 16 companies including Alstom and Motorola because of their links to Israeli settlements in the occupied West Bank.

OSLO Norway announced the easing of some COVID-19 restrictions on Monday but delayed the final phase of reopening the economy until the end of this month at the earliest because of concerns about the Delta coronavirus variant.

SINGAPORE Senior foreign executives of major telecommunications firms in Myanmar have been told by the junta that they must not leave the country without permission, a person with direct knowledge of the matter said. | Video

OSLO (Reuters) -Norwegian telecoms operator Telenor is considering the future of its operations in Myanmar due to the deteriorating business and security situation in the country, the company said on Friday.

MUMBAI/NEW DELHI Rescue teams in India struggled through thick sludge and debris on Saturday to reach dozens of submerged homes as the death toll from landslides and accidents caused by torrential monsoon rain rose to 125. | Video