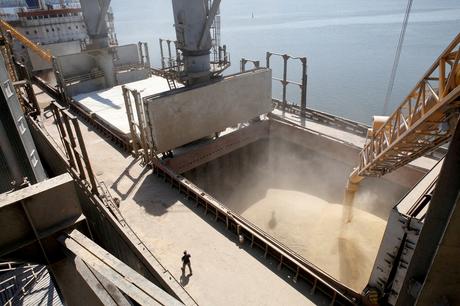 ANKARA (Reuters) -Turkey is in negotiations with Russia and Ukraine to open a corridor via the Bosphorus for grain exports from Ukraine, a senior Turkish official told Reuters on Thursday.

KYIV Two captured Russian soldiers pleaded guilty on Thursday to shelling a town in eastern Ukraine in the second war crimes trial of the war.

(Reuters) -Russia's foreign ministry said on Thursday that reporters from Western countries will be expelled from Russia if YouTube blocks access to its spokeswoman's briefings.

Ukraine and Russia: What you need to know right now 5:36am EDT

SARAJEVO (Reuters) -British foreign minister Liz Truss accused Russian President Vladimir Putin of holding the world to ransom over food, responding to a question about whether she supported lifting sanctions in exchange for grain exports from Ukraine.

Putin will not dictate Ukraine peace terms: Scholz 5:26am EDT

DAVOS, Switzerland Russia will not win its war in Ukraine and the terms of any peace must not be dictated by Russian President Vladimir Putin, Germany Chancellor Olaf Scholz said on Thursday.

G7 can spearhead climate fight by agreeing to phase out coal, Germany says 5:01am EDT

BERLIN (Reuters) -The Group of Seven countries can spearhead the fight against climate change and accelerate a pivot away from fossil fuels by agreeing to phase out coal power generation, Germany's economy minister Robert Habeck said on Thursday.

GENEVA A proposal to condemn the regional health emergency triggered by Russia's aggression in Ukraine will come before a World Health Organization (WHO) assembly on Thursday, prompting a rival resolution from Moscow that makes no mention of its own role in the crisis.

Russian forces battle to surround Ukrainians in east 3:56am EDT