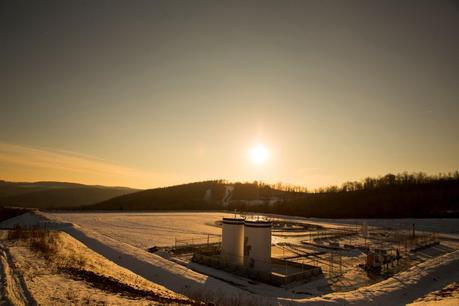 Pipeline operator Williams Companies Inc said on Monday it will take ownership of some of Chesapeake Energy Corp's assets in exchange for accepting lower gas gathering fees from the bankrupt shale producer.

HOUSTON Chesapeake Energy Corp on Monday sought bankruptcy court approval to cancel $311 million in pipeline contracts, setting up a battle with U.S. regulators and operators including Energy Transfer LP, according to court filings.

NEW YORK Chesapeake Energy Corp filed for Chapter 11 on Sunday, becoming the largest U.S. oil and gas producer to seek bankruptcy protection in recent years as it bowed to heavy debts and the impact of the coronavirus outbreak on energy markets.

HOUSTON Chesapeake Energy Corp's bankruptcy will pile more pain onto leading energy service and pipeline companies whose revenues were already being slammed during the latest collapse in oil prices, according to energy analysts and corporate filings.

Exclusive: Chesapeake Energy to file for bankruptcy as soon as this week - sources

NEW YORK Chesapeake Energy Corp is preparing to file for bankruptcy as soon as this week, said three people familiar with the matter, becoming the largest oil and gas producer to unravel after an energy market rout caused by the coronavirus outbreak. | Video

Chesapeake Energy Corp said on Monday it was unable to access financing and was considering a bankruptcy court restructuring of its over $9 billion debt if oil prices don't recover from the sharp fall caused by the COVID-19 pandemic. | Video

NEW YORK Chesapeake Energy Corp said it would prepay a total of $25 million in incentive compensation to 21 top executives to ensure they are motivated, even as it prepares to file for bankruptcy protection to tackle its nearly $9 billion debt pile.

Chesapeake Energy Corp, the oil and gas exploration and production company that was at the forefront of the past decade's U.S. shale boom, is preparing a potential bankruptcy filing as it grapples with an unprecedented rout in energy prices, people familiar with the matter said on Wednesday.

Chesapeake Energy Corp, the oil and gas exploration and production company that helped spearhead the U.S. shale revolution, has tapped debt restructuring advisers amid a rout in energy prices, people familiar with the matter said on Monday.

At a time when companies in a U.S. natural gas field have been losing money and exiting Louisiana's Haynesville shale basin, Dallas Cowboys' owner Jerry Jones' Comstock Resources is picking up cheap assets, betting on the field's proximity to the growing U.S. Gulf Coast export hub.

A look at loans made to Chesapeake Energy CEO Aubrey McClendon.  View graphic

Breakingviews columnists discuss the echoes of Enron in the complexity of Chesapeake Energy as the company struggles with a governance scandal.  Full Coverage