TOKYO Japanese Prime Minister Fumio Kishida on Saturday fired an aide who said he wouldn't want to live next to lesbian, gay, bisexual or transgender couples and warned that people would flee Japan if same-sex marriage was permitted.

WASHINGTON The U.S. Senate passed a bill on Tuesday that would protect federal recognition of same-sex marriage, a measure taken up in response to worries the Supreme Court could overturn a 2015 decision that legalized it nationwide. | Video

TOKYO (Reuters) -A Tokyo court upheld a ban on same-sex marriage on Wednesday but said a lack of legal protection for same-sex families violated their human rights, a comment welcomed by plaintiffs as a step towards aligning Japan with other G7 nations. | Video

SINGAPORE Singapore's parliament on Tuesday decriminalised sex between men, but, in a blow to the LGBT community, also amended the constitution to prevent court challenges that in other countries have led to the legalisation of same-sex marriage.

WASHINGTON (Reuters) -The U.S. Senate on Wednesday voted to advance a bill protecting federal recognition of same-sex marriage, prompted by concerns that a more conservative Supreme Court could reverse a 2015 decision that made it legal nationwide. | Video

WASHINGTON Democrats in the U.S. Congress aim to pass bills protecting same-sex marriage, clarifying lawmakers' role in certifying presidential elections and raising the nation's debt ceiling when they return from the campaign trail on Monday. | Video 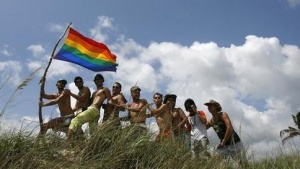