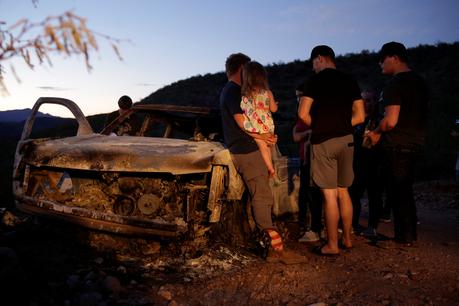 MEXICO CITY Mexico captured a gang leader accused of being the mastermind behind the massacre of nine women and children of U.S.-Mexican origin, authorities confirmed on Wednesday, a move that Washington hailed as a victory for bilateral cooperation.

Journalist killings in Mexico worst in a decade, government says

MEXICO CITY This has been the most violent year for journalists in Mexico in at least a decade, with 19 murdered, a senior official said on Wednesday, the latest sign the government is struggling to get a grip on chronic violence.

MEXICO CITY Mexican President Andres Manuel Lopez Obrador on Monday denied that Mexico had agreed to capture a cartel leader for the United States in order to secure the return of ex-defense minister Salvador Cienfuegos from U.S. custody.

MEXICO CITY/WASHINGTON Mexico has committed to the arrest of a high-level cartel leader under a deal with U.S. Attorney General William Barr to drop U.S. drug trafficking charges against a former Mexican defense minister, a senior Mexican source told Reuters.

MEXICO CITY Mexican senators on Friday began weighing a sweeping initiative to legalize recreational use and sale of marijuana, a proposal that could create the world's largest weed market in a country battered by a violent war against drug gangs.

CULIACAN, Mexico The children of former drug lord Joaquin "El Chapo" Guzman helped build a makeshift school near the Mexican city of Culiacan for families who have no access to online classes during the coronavirus pandemic, residents said.

MONTERREY, Mexico These days, Martin Salgado’s migrant shelter in the city of San Luis Rio Colorado on Mexico’s border with the United States feels more like an hourly hotel. His guests, many of them from Central America, often don't even bother to spend the night.

The bodies of Mexico

As the drug war rages, bodies pile up on the streets of Mexico.  Slideshow