Louisiana hunkers down as storm Zeta takes aim at state 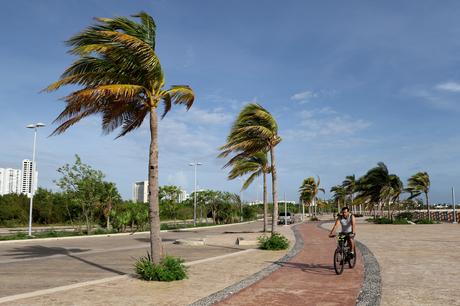 Louisiana prepared for the sixth lashing this year from a Gulf Coast system as Tropical Storm Zeta sped off the Yucatan Peninsula bringing high winds and rain to a region still reeling from a series of storms.

HOUSTON Energy firms and ports along the U.S. Gulf Coast prepared on Tuesday for another test as Hurricane Zeta, the 11th hurricane of the season, entered the Gulf of Mexico.

Firefighters in Southern California reported little headway on Tuesday against two explosive, wind-whipped wildfires that forced the evacuations of tens of thousands of residents and badly injured two crew members on the front lines. | Video

HANOI Authorities in Vietnam were scrambling on Tuesday to move more than half a million people out of harm's way ahead of a powerful typhoon set to dump more heavy rain on a central region devastated by weeks of intense weather.

HANOI/MANILA Vietnam is preparing to evacuate nearly 1.3 million people as it braces for the impact of typhoon Molave, which lashed the Philippines overnight causing flooding, landslides and leaving at least a dozen fishermen missing on Monday.

HOUSTON BP on Sunday said it has begun to evacuate four offshore U.S. Gulf of Mexico oil platforms and secure facilities as Tropical Storm Zeta sprang up in the Caribbean Sea.

Nearly 9,000 flee homes in Philippines as Molave intensifies into typhoon

MANILA Nearly 9,000 people fled their homes in the Philippines as Typhoon Molave made landfall while traversing provinces on the southern part of the main Luzon island on Sunday, bringing heavy rain and strong winds, officials said.

DENVER Crews battling a string of wildfires in drought-stricken Colorado braced on Friday for the return of high winds that have stoked flames in what authorities have called an unprecedented outbreak of late-season wildfires.

HANOI/MANILA Vietnam scrambled to evacuate thousands of people from their homes as tropical storm Saudel approached on Wednesday, bringing more misery for a country that has endured weeks of heavy rains and floods that have killed over 100 people. | Video