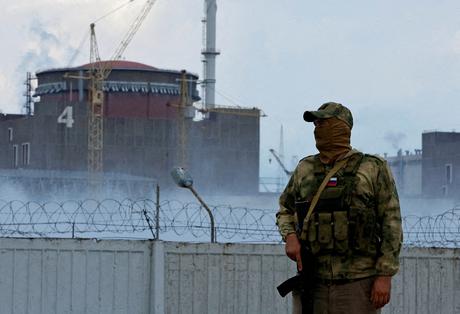 GENEVA Nuclear powers have criticized an effort led by the Marshall Islands at the United Nations to seek help on dealing with the consequences of nuclear testing, sources following the talks involving countries including the United States, Britain, Russia, India and China told Reuters.

LONDON The share of nuclear power in global gross electricity generation fell below 10% last year to the lowest in around four decades, an industry report showed on Wednesday.

LONDON President Vladimir Putin, who rules the world's biggest nuclear power, has repeatedly cautioned the West that any attack on Russia could provoke a nuclear response. | Video

Zaporizhzhia plant chief will not return to job after detention, IAEA says

VIENNA (Reuters) -The head of the Russian-occupied Zaporizhzhia nuclear power plant (ZNPP) in Ukraine who was detained over the weekend in what Ukraine called a Russian act of terror will not return to that job, the U.N. nuclear watchdog said on Tuesday.

VIENNA (Reuters) -The head of the Russian-occupied Zaporizhzhia nuclear power plant in Ukraine has been released, U.N. nuclear watchdog chief Rafael Grossi said on Monday after a detention that Ukraine blamed on Russia and called an act of terror.

KYIV (Reuters) -Ukraine will not be swayed by any nuclear threats from Moscow or annexation votes held on its territory and will press ahead with its plan to wrest back all its occupied land from Russia, a Ukrainian presidential adviser said on Tuesday. | Video

UNITED NATIONS (Reuters) -The president of the Pacific island state of Micronesia denounced at the United Nations on Thursday Japan's decision to discharge what he called nuclear-contaminated water from the Fukushima Daiichi Nuclear Power Station into the Pacific Ocean.

WARSAW Poland, concerned about fighting around Ukraine's Zaporizhzhia nuclear power plant, has distributed iodine tablets to regional fire departments to give to people in the event of radioactive exposure, a deputy minister said on Thursday.

NEW YORK (Reuters) -The head of the United Nations atomic agency said on Wednesday he would not abandon a plan to create a protection zone around the Zaporizhzhia nuclear power plant despite Russian plans to mobilize new troops and hold a referendum in the region.