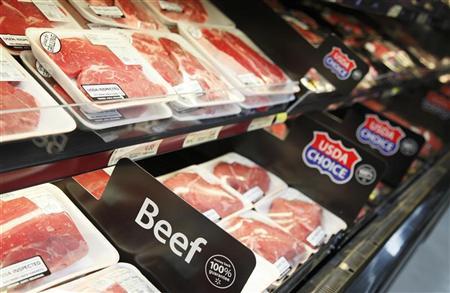 CHICAGO U.S. consumers, already cringing at high beef prices, can expect even more expensive meat later this year due to the smallest cattle herd in more than 50 years, the chief executive of one of the nation's largest meat companies said on Wednesday.

Cargill sticking with ethanol despite challenges

CHICAGO Agribusiness company Cargill Inc is expanding in the corn-based ethanol business despite a sluggish demand outlook for the renewable fuel, the head of the company's corn milling group said on Thursday.

Clean your plate, save the world?

CHICAGO Cleaning your plate may not help feed starving children today, but the time-worn advice of mothers everywhere may help reduce food waste from the farm to the fork, help the environment and make it easier to feed the world's growing population.

CHICAGO Bacardi Ltd is trying to tap more into the dark side of spirits, launching its first cognac in the United States where it is known more for white spirits like Grey Goose Vodka and its Bacardi Superior clear rum.

CHICAGO General Mills Inc's mix of foods and its limited exposure to Italy and Greece have helped insulate it from Europe's economic crisis, one of the company's top executives said on Wednesday.

CHICAGO, March 13 - Beam Inc has raised prices on some of its alcoholic drinks this year as the U.S. economy shows signs of improving and the company could have more price increases as opportunities arise, according to a top executive.

JAKARTA Heavy rains in the first quarter will lead to a 60 percent slump in Indonesia's cocoa bean output compared to a year ago, an industry group said on Wednesday, although the full-year figure is likely to show a near 10 percent increase.

CHICAGO, March 13 - DuPont says it expects soy supplements to fuel much of the growth in its food ingredients business and for its products to help solve the widespread problem of weed tolerance to pesticides.

Only a few can afford Viterra: BMO Capital Markets

CHICAGO Only a handful of global commodity companies have deep enough pockets to win a bidding war for Canadian grain handler Viterra , which is a "very, very unique asset," said Greg Pearlman, head of BMO Capital Markets food and consumer group on Monday.