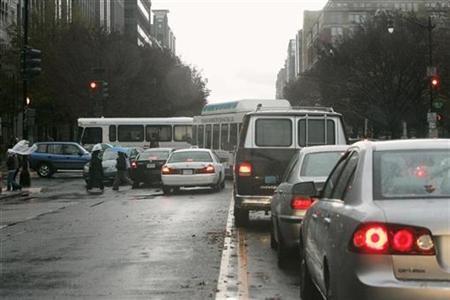 NEW YORK The crumbling U.S. infrastructure is routinely in plain sight, from potholes strewn across interstate highways built during the Eisenhower administration to rusting Depression-era bridges connecting those old highways.

WASHINGTON The U.S. Senate is considering a wide variety of funding options for the country's roads, bridges and public transit as it drafts its version of a sweeping national transportation spending bill, Senator Barbara Boxer told Reuters on Thursday.

NEW YORK The flow of money once provided by public-private partnerships for large U.S. infrastructure projects has dried up, and the sector will likely require government money to fill the gap, a top executive at engineering and construction group Fluor Corp said on Thursday.

NEW YORK U.S. architects, whose design billings act as a leading indicator of construction activity, are buzzing about stimulus money flowing into their industry but it is too soon to call a construction recovery, the chief economist of an architects' trade group said on Thursday.

NEW YORK Public-private partnerships for infrastructure are not a "panacea" for cash-hungry U.S. states and cities eager to expand or build new utilities, water plants, roads or bridges, a JPMorgan Chase & Co banker said on Thursday.

NEW YORK Mass transportation in the U.S. deserves a big boost in federal funding to help counter global warming and to meet the growing needs of riders, the head of the country's largest transit system said on Thursday.

WASHINGTON President Barack Obama will likely explain his vision for a national infrastructure bank in the detailed budget he plans to release on Thursday, but analysts warn the bank will not be a comprehensive or quick fix for the nation's road and highway problems.