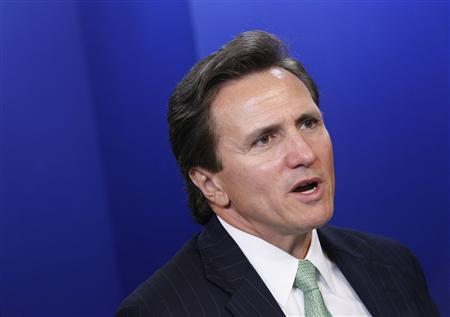 U.S. money managers not giving up on equities

New York The violent swings in the U.S. stock market have damaged investors' psyches, but money managers at this week's 2012 Reuters Investment Outlook Summit see the environment as a buying opportunity.

NEW YORK There is a 90 percent chance the United States will slide into recession next year, according to hedge fund manager John Taylor, who said such a scenario would likely once again benefit the safe-haven dollar.

NEW YORK A high correlation between assets classes has been the hallmark of financial markets this year, with assets moving in seemingly perfect lock-step, but that panorama may be on the verge of breaking down, investors at the 2012 Reuters Investment Outlook summit said this week.

Hedge fund managers lament the end of the golden era

NEW YORK For years, running a hedge fund was the road to riches, but with the giddy years of double-digit returns at an end, prospects for profits look decidedly more gloomy, top managers and investors say.

NEW YORK Money managers are bracing for more market volatility and political uncertainty as they weigh their investment choices in 2012, reiterating a warning that simply holding cash won't completely insulate investors from losses.

New York John Taylor, founder of hedge fund FX Concepts, said he might be the "darling" of the media because of his prescient doom-and-gloom views on global economic growth, but that hasn't prevented him from suffering big losses.

LONDON Money managers are trying to reduce the number of counterparties to focus on bigger and stable banks to secure their assets and payments as they plan for the worst-case scenario in the euro zone debt crisis.

LONDON Standard Life Investments expects the euro will survive intact in 2012 but it has been stress-testing its portfolios and planning contingencies for all scenarios, including a euro break-up, its top investment officer said on Wednesday.