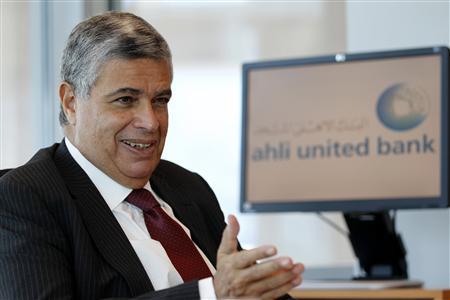 MANAMA Bahrain-based Ahli United Bank (AUB) is looking for acquisitions in its existing markets and in new ones as it tries to build a network across the Middle East, its chief executive said.

DUBAI National Bank of Fujairah (NBF) may open trade finance offices in Africa as part of an expansion of foreign business that is taking the bank far from its roots in one of the more remote, less developed parts of the United Arab Emirates.

BEIRUT Lebanon will need $2.6 billion in budget support over a three-year period to help it overcome the impact of the civil war in neighboring Syria, caretaker Finance Minister Mohammed Safadi said on Wednesday.

DUBAI Dubai will strictly enforce existing rules and if necessary set new ones to prevent another bubble from forming in its property market, while cracking down on abuses by real estate brokers, the Director General of the emirate's Land Department said.

AMMAN The cost of accommodating hundreds of thousands of Syrian refugees in Jordan is hampering the economy's ability to grow substantially beyond a three to 3.5 percent IMF annual growth target for the next two years, the central bank governor said.

DUBAI Templeton Emerging Markets Group is looking to increase its equities investment in Egypt because it thinks the political environment will stabilize and the government is committed to repairing the economy, the head of the group said.

CAIRO Egypt aims to attract 13.5 million visitors next year, bringing in around $11 billion, as it launches an international campaign to lure back foreigners deterred by political turmoil, the tourism minister said.

DOHA Qatar's sovereign wealth fund is looking at more investments in emerging markets in order to diversify beyond developed nations, said a senior executive of Credit Suisse who is one of the top advisors to the fund.