[1/2] A farmer harvests corn in a field on the outskirts of Jiayuguan, Gansu province, China September 28, 2020. REUTERS/Carlos Garcia Rawlins

BEIJING/SINGAPORE, July 7 (Reuters) - Chinese farmers have sharply increased corn planting this year to cash in on demand-fuelled record prices, a trend that is likely to cool the country's recent rampant appetite for imports heading into 2022.

The expansion, which comes mainly at the expense of soybeans and other crops including sorghum and edible beans, would boost China's maize output in 2021/22 by at least 6%, according to market participants.

That will likely ease a repeat of last year when strong feed demand from the hog sector propelled China's corn use beyond local production and sparked a 26-million tonne import spree that turned the world's largest grain producer into the top corn buyer.

"I'm going to grow corn on all my land this year. No more other stuff," said Li, a farmer in the northern Hebei province who last year grew millet on about one third of the 300 mu (20 hectares) of land he manages.

"Corn prices jumped so high last year. Profits would be good," said Li, who declined to give his full name. 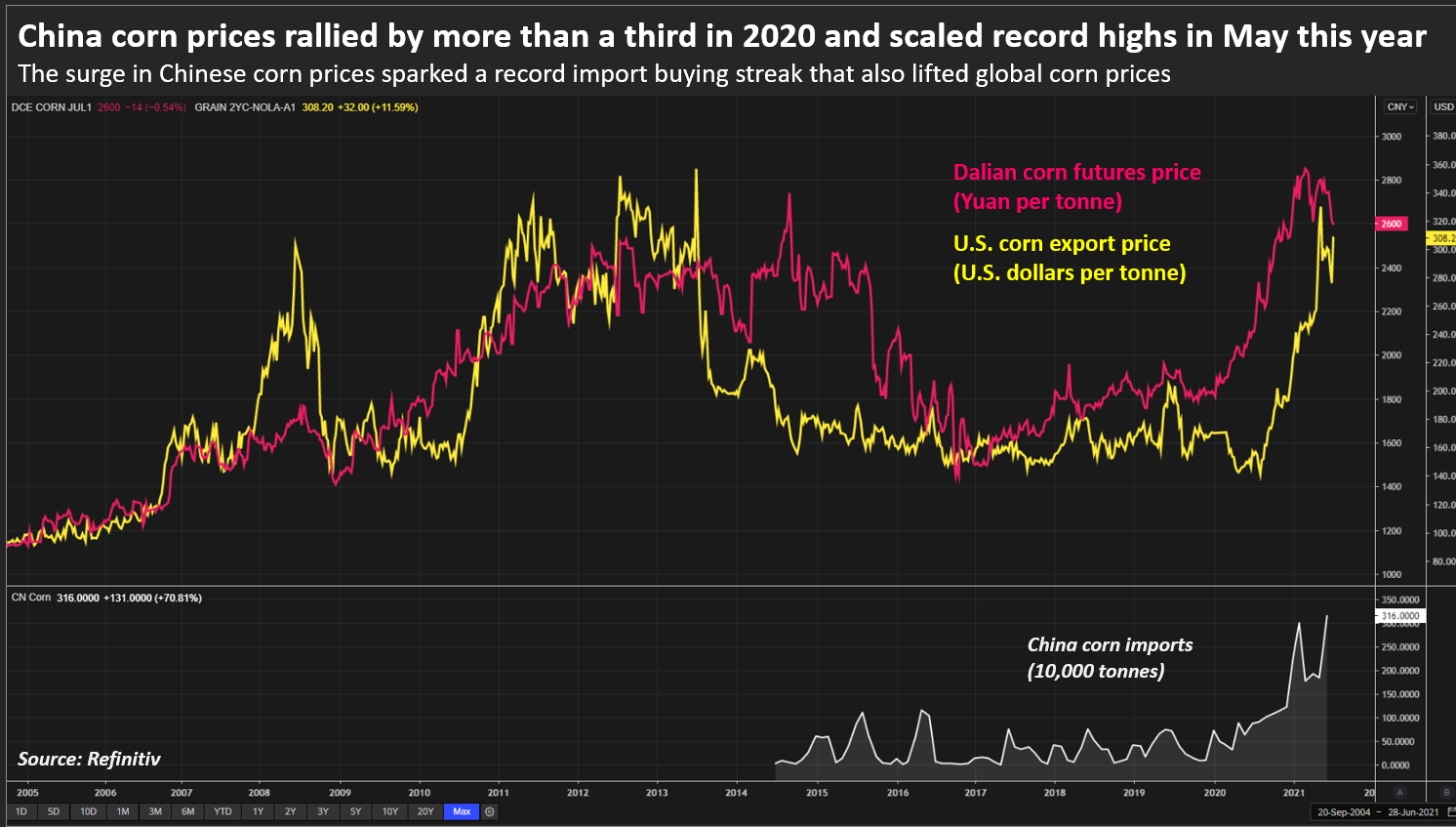 Consistent and accurate data on China's crop footprints is hard to come by, especially following the unexplained suspension of Beijing-based agriculture information provider Cofeed. The private consultancy, which many in the market regarded as the most comprehensive supplier of information on grains and oilseeds in China, ceased updating data in April.

With Cofeed offline, and other consultancies reluctant to diverge their crop views too far from government estimates that are often considered conservative, market participants have become increasingly reliant on anecdotal evidence for nearer-term readings on acreage shifts.

JCI has forecast a 6.2% rise, around 14.9 million tonnes, in corn output in 2021/22 to 253.9 million tonnes, the highest in four years. Based on surveys among farmers and other industry players like seed sellers, JCI estimates corn acreage expanding by 3.9% to 42.0 million hectares.

"Corn prices are high and benefits are good. People still think there will be a corn shortage (this year) while livestock farming is recovering," said JCI analyst Rosa Wang.

While the JCI projections are on par with and slightly above the 3.96% and 4.9% rises in acreage and output respectively by China National Grains & Oils Information Center, a government think tank, other forecasters - and farmers themselves - say they are too conservative.

Huatai Futures, a major futures brokerage that conducts farmer planting surveys in China, forecasts a 14.5% rise in output and a 6.2% rise in acreage.

In the northeastern province of Heilongjiang, the country's top corn and soy grower, farmers have planted 27% more corn than a year ago, said Zhang Zhidong, analyst with Huatai Futures.

China has long restricted the import of corn via a system of low-tariff quotas, historically totalling around 7 million tonnes annually.

The surge in benchmark Dalian corn prices last year, however, outstripped international prices by so much that importers could still bring in international corn, pay the full tariff and make a profit.

Key exporters who have benefited from China's corn import binge include the United States and Ukraine.

Amid fears of food inflation, Beijing has supported the corn planting drive in key grains hubs, reversing a years-long policy stance of encouraging growers to diversify away from maize after officials ended a costly corn stockpiling scheme and sold off mammoth reserves.

The U.S. Department of Agriculture's China attache expects 2020/21 imports to slip to 20 million tonnes, versus the USDA official estimate of 26 million tonnes, on a drop in international corn's price competitiveness and higher local production.

Corn's gains come mainly at the expense of soybeans, which could have the converse effect of increasing imports of the legume, which comes primarily from the United States and Brazil.

"We have increased corn planting acreage by 25%, which means a 25% fall in soybean acreage," said farmer Liu, who jointly manages around 1,700 hectares in Heihe, a traditional soybean stronghold in Heilongjiang.

Another farmer, Han, who manages more than 750 mu of land in neighbouring Inner Mongolia, has replaced all soybean acreage, about 80% of the land he manages, with corn this year, betting on "bullish corn prices."

Back in Hebei, Mr. Li is relieved he can go back to growing corn after stints growing soybeans and millet in the past few years.

"We don't have much experience growing other crops anyway," he said. "We used to always grow corn after harvesting wheat. For years and generations, it has been mostly like this."

Reporting by Hallie Gu in Beijing and Gavin Maguire in Singapore; Editing by Jane Wardell

Gavin Maguire is the Global Energy Transition Columnist. He was previously Asia Commodities and Energy editor.