BENGALURU, June 18 (Reuters) - A third wave of coronavirus infections is likely to hit India by October, and although it will be better controlled than the latest outbreak the pandemic will remain a public health threat for at least another year, according to a Reuters poll of medical experts.

The June 3-17 snap survey of 40 healthcare specialists, doctors, scientists, virologists, epidemiologists and professors from around the world showed a significant pickup in vaccinations will likely provide some cover to a fresh outbreak.

Of those who ventured a prediction, over 85% of respondents, or 21 of 24, said the next wave will hit by October, including three who forecast it as early as August and 12 in September. The remaining three said between November and February.

But over 70% of experts, or 24 of 34, said any new outbreak would be better controlled compared with the current one, which has been far more devastating - with shortage of vaccines, medicines, oxygen and hospital beds - than the smaller first surge in infections last year.

"It will be more controlled, as cases will be much less because more vaccinations would have been rolled out and there would be some degree of natural immunity from the second-wave," said Dr Randeep Guleria, director at All India Institute Of Medical Sciences (AIIMS). 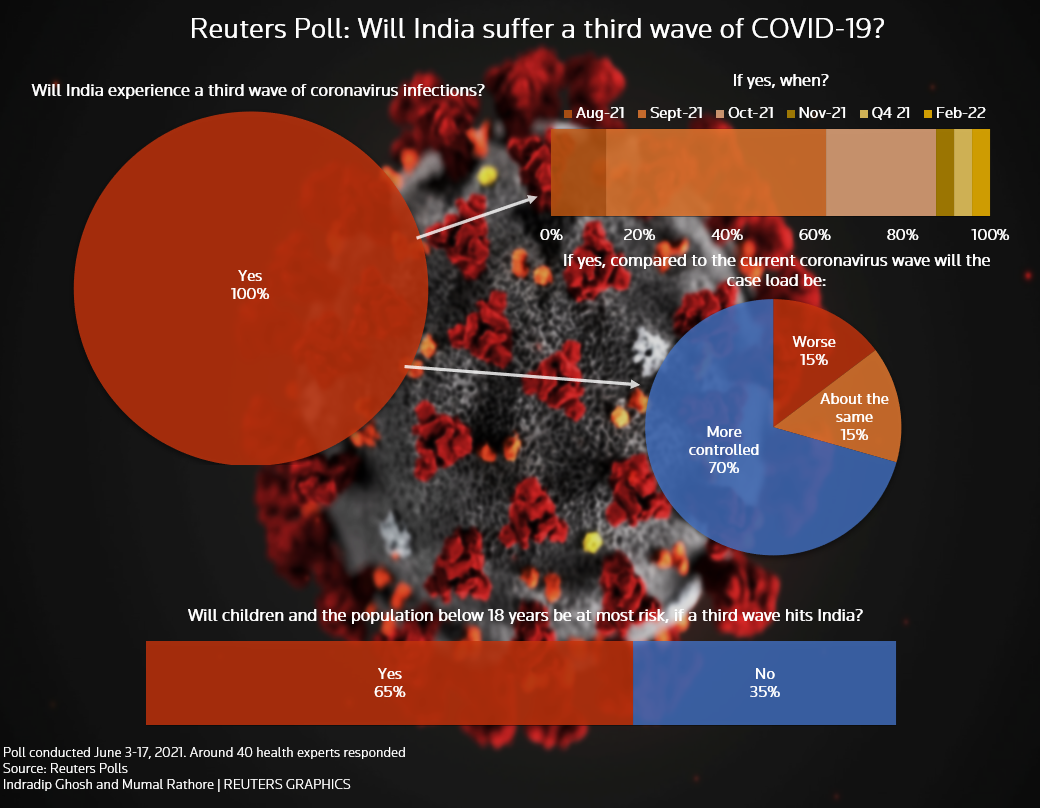 So far, India has only fully vaccinated about 5% of its estimated 950 million eligible population, leaving many millions vulnerable to infections and deaths.

While a majority of healthcare experts predicted the vaccination drive would pick up significantly this year, they cautioned against an early removal of restrictions, as some states have done.

When asked if children and those under 18 years would be most at risk in a potential third wave, nearly two-thirds of experts, or 26 of 40, said yes.

"The reason being they are a completely virgin population in terms of vaccination because currently there is no vaccine available for them," said Dr Pradeep Banandur, head of epidemiology department at National Institute of Mental Health and Neurosciences (NIMHANS).

"If children get infected in large numbers and we are not prepared, there is nothing you can do at the last minute," said Dr Devi Shetty, a cardiologist at Narayana Health and an advisor to the Karnataka state government on pandemic response planning.

"It will be a whole different problem as the country has very, very few paediatric intensive care unit beds, and that is going to be a disaster."

But 14 experts said children were not at risk.

Earlier this week, a senior health ministry official said children were vulnerable and susceptible to infections but that analysis has shown a less severe health impact. 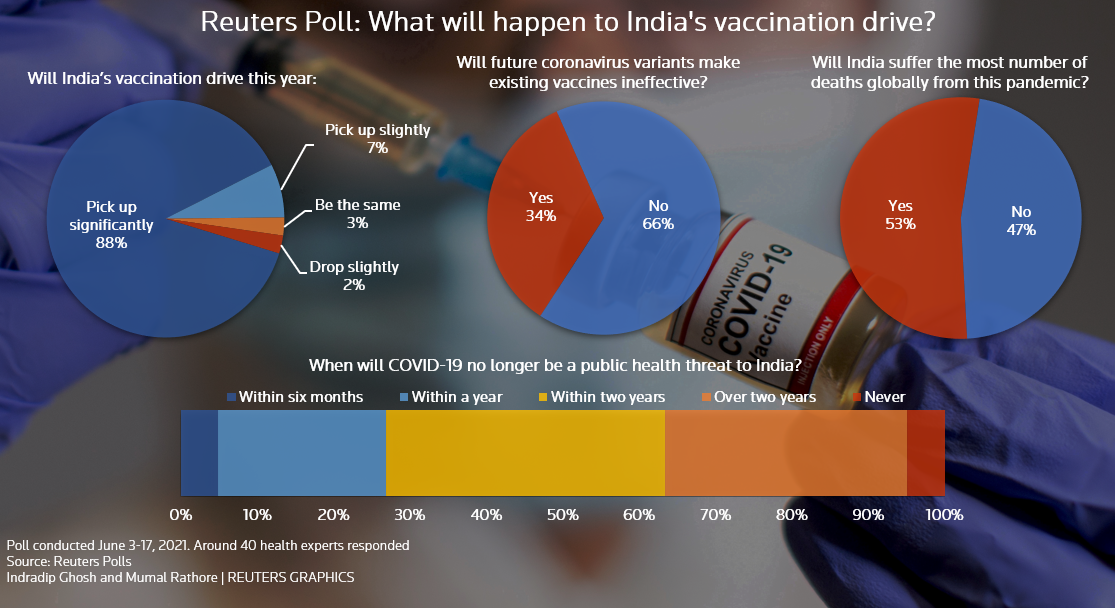 While 25 of 38 respondents said future coronavirus variants would not make existing vaccines ineffective, in response to a separate question, 30 of 41 experts said the coronavirus will remain a public health threat in India for at least a year.

Eleven experts said the threat would remain for under a year, 15 said for under two years, while 13 said over two years and two said the risks will never go away.

“COVID-19 is a solvable problem, as obviously it was easy to get a solvable vaccine. In two years, India likely will develop herd immunity through vaccine and exposure of the disease,” said Robert Gallo, director of the Institute of Human Virology at the University of Maryland and international scientific advisor, Global Virus Network.