A man wearing a handkerchief as a mask moves past parked autorickshaw during a curfew to limit the spreading of coronavirus disease (COVID-19), in Mumbai, India, March 24, 2020. REUTERS/Prashant Waydande/File Photo

The latest survey results suggest difficult policy decisions lie ahead for the Reserve Bank of India, which has already seen two consecutive months of inflation above the 6% upper limit of the range it tolerates.

The RBI said last week that prospects for the economy had brightened and the inflation rise would be transitory, echoing the views of most major central banks.

But the fast spread of the Delta variant in some states - and it is becoming dominant around the world - has raised doubts as the country contends with a devastating wave of COVID-19.

The July 15-22 poll of 52 economists showed a third consecutive downgrade to the growth outlook for the current fiscal year 2021-22, but also the third such upgrade to the following year.

About two-thirds of economists, or 23 of 36, who responded to an extra question said virus variants were the biggest risk, while only a handful cited high inflation.

"Resurgence in cases and (any) emergence of fresh variants are notable risks for the economy for the rest of the year, particularly at a time when vaccination coverage is short of achieving a critical mass," said DBS economist Radhika Rao.

"Reinstatement of movement curbs risks deepening the damage inflicted on the informal sector, which contributes to nearly half of the national output and employs a majority."

A separate Reuters survey of global health experts last month concluded another wave of infections and COVID-19 in India was likely by October. read more

After contracting in the previous fiscal year at its fastest annual pace since records began over four decades ago - one of the worst-hit in Asia, the economy was predicted to expand 9.4% in the current fiscal year.

The last time the economy grew that quickly was in 2010.

The latest consensus forecast was a downgrade from 9.8% in the previous poll in May, itself down from 11.0% in April, and slightly below the RBI's latest projection of 9.5%. read more 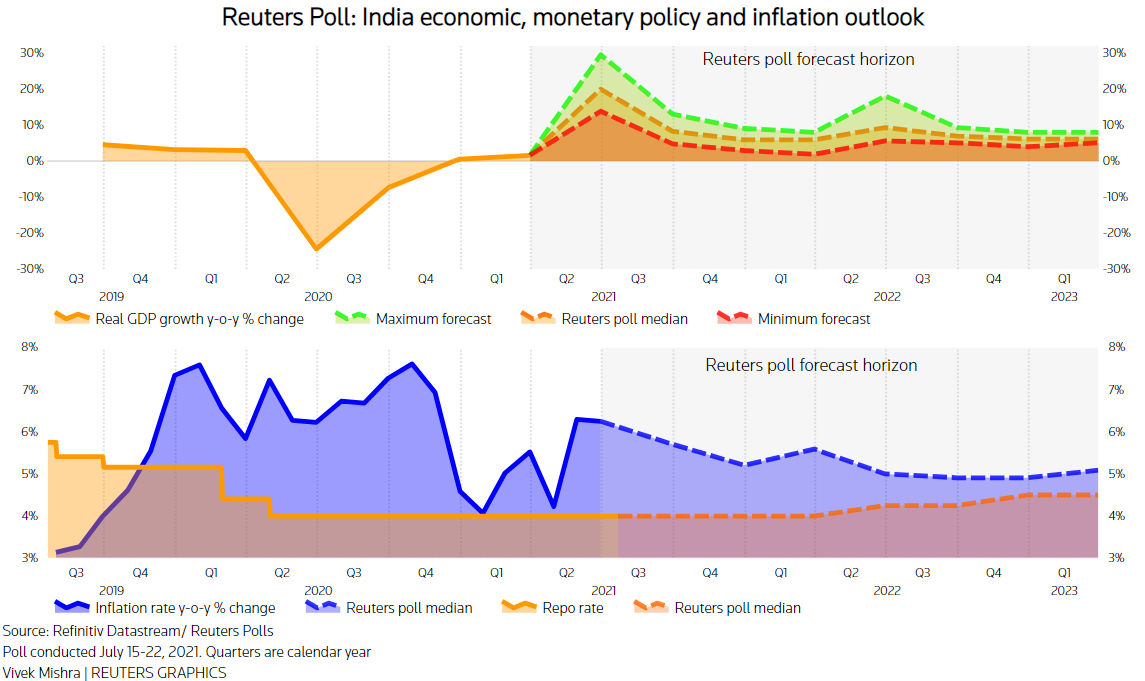 Although inflation was forecast to ease from 6.3% at the last measure, the consensus was for it to average above the mid-point of the RBI's medium-term target of 2%-6% at least until early 2023.

For now, the RBI is expected to keep its policy rates unchanged as inflation appears to be coming off a peak.

But the consensus pointed to two 25 basis point hikes each next fiscal year, taking the repo rate to 4.50% by end-March 2023, with 32 economists now predicting at least one hike by early that year compared with 24 in the previous poll.

"Despite the growth concerns, we think the RBI will eventually need to act to bottle the inflation genie so as not to lose control. We therefore expect monetary policy normalisation to start relatively soon," noted Kunal Kundu, India economist at Societe Generale.

"However, with a third wave of the pandemic appearing to be a certainty, with experts pointing to the less than desirable pace of vaccination, the precise timing of normalisation remains uncertain."

(For other stories from the Reuters global economic poll )

Kohli to step down as RCB skipper after 2021 IPL season

Virat Kohli will step down as captain of the Indian Premier League (IPL) franchise Royal Challengers Bangalore (RCB) after the 2021 season, the player said on Sunday.

India reports 30,773 new COVID cases as it seeks to welcome back tourists

France says to work with India to promote multilateral order