A fuel pump attendant cleans the keypad of a pump at an Indian Oil filling station in Ahmedabad, India, May 14, 2018. REUTERS/Amit Dave/File Photo

CHENNAI, June 9 (Reuters) - Rizwanudeen, a 37-year old worker who delivers food in the southern Indian city of Chennai, struggles to pay his rent and loan instalments at the end of every month as he has been hit by the double whammy of higher fuel prices and fewer food orders.

Millions of weekly wage earners like Rizwanudeen who make their living ferrying goods or people throughout India have been hit hard by record high fuel prices which are among the highest in Asia, having risen by a third in the 15 months since the coronavirus first struck the country.

The average cost of a litre of gasoline in Mumbai has risen above 100 rupees ($1.37) this month, 50 to 70% more than in Bangkok, Hanoi and Manila. State and federal taxes, which have doubled since Prime Minister Narendra Modi came to power in 2014, account for more than 60% of India's retail fuel price.

With the federal government facing ballooning healthcare costs tied to its ongoing battle with COVID-19, and committed to vast farm and other subsidies, a finance ministry official said there was little scope for a meaningful tax cut that might ease the pain on low earners.

"I used to spend 1,500 rupees ($20.58) a week on petrol before the pandemic, now I spend 2,000 rupees. I am already earning less due to fewer orders due to lockdowns," Rizwanudeen lamented, saying a third of his earnings went on fuel.

For an Indian earning the average national wage, a litre of gasoline would take up a quarter of their daily income, according to Reuters calculations.

Federal government fuel tax revenues have risen 80% to 2.55 trillion rupees over six years ending 2019/20, P.T.R. Palanivel Thiagarajan, the finance minister of southern Tamil Nadu state said in a meeting on taxes in May.

But tax revenues shared with the states have declined by over 200 billion rupees over that period, he added, echoing a common gripe among state officials over fuel tax allocations.

With total federal tax collections hit by the industrial slowdown caused by coronavirus-induced lockdowns, New Delhi has been reluctant to lower fuel taxes, even after oil prices collapsed to multi-year lows last year.

State authorities, which have faced soaring healthcare costs this year due to the pandemic, have blamed the federal levies for the higher prices.

The federal government in turn has said it would only cut taxes if states-level taxes are cut.

Despite the standoff over who should move first to lower tax rates, the country’s central bank governor Shaktikanta Das acknowledged last week that surging fuel prices posed a threat to the broader economy and required coordinated action by central and state governments. 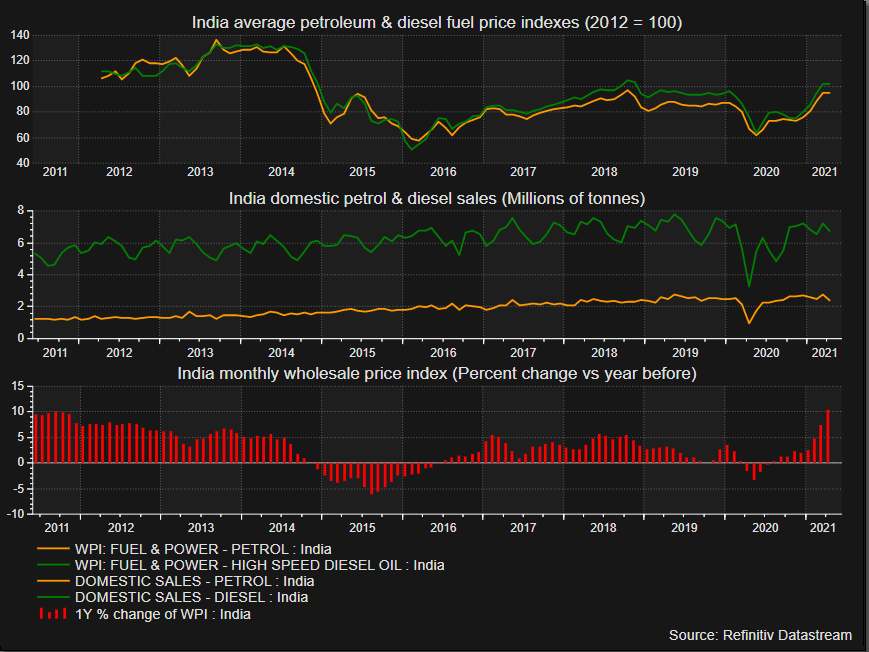 Further key cost increases are on the way. Rental rates of trucks, which deliver everything from perishable produce to machine parts in India, could rise by 10% this month on the back of higher fuel costs, said SP Singh, senior fellow at Indian Foundation of Transport Research & Training.

"In May, rentals declined as truckers saddled with monthly instalments for vehicle purchases were absorbing fuel prices in the absence of business. Now, as lockdowns are easing, freight rates are firming up," Singh said.

RBI Governor Das also said that while federal and state governments may be inclined to tackle high fuel prices, their options may be limited by their already-tattered budgets.

For Selva Murugan, a 35-year old former driver around Chennai for car service Ola, the damage has already been done.

“I was able to pay my loan dues when diesel cost about 65 rupees a litre. After that, I started feeling the crunch and around the time it touched 75 rupees I decided to sell my car,” Murugan said.