There was a giant helping of Chinese data, including a slightly below consensus second quarter GDP reading, to digest too as well as plenty more earnings numbers to come. read more

But markets' delight after Jerome Powell told Congress he saw no need to rush the shift towards tighter post-pandemic monetary policy, had not lasted long.

The main all-world indicies (.MIWD00000PUS) were also off their recent record highs, tempered possibly by rising COVID-19 cases around the globe and signs the post-pandemic bounce in company earnings may also be hitting a peak.

"The market is fearing the Delta variant could take a hold of different economies so you are almost seeing that we are back to the 'bond yields lower, tech doing well' scenario," said Justin Onuekwusi, portfolio manager at Legal & General Investment Management.

The likes of Amazon and Google are up 6-8% this month, while China's biggest tech firms Alibaba and Tencent have surged more than 12% since China's central bank made a supportive tweak for the first time in nearly a year on Friday. 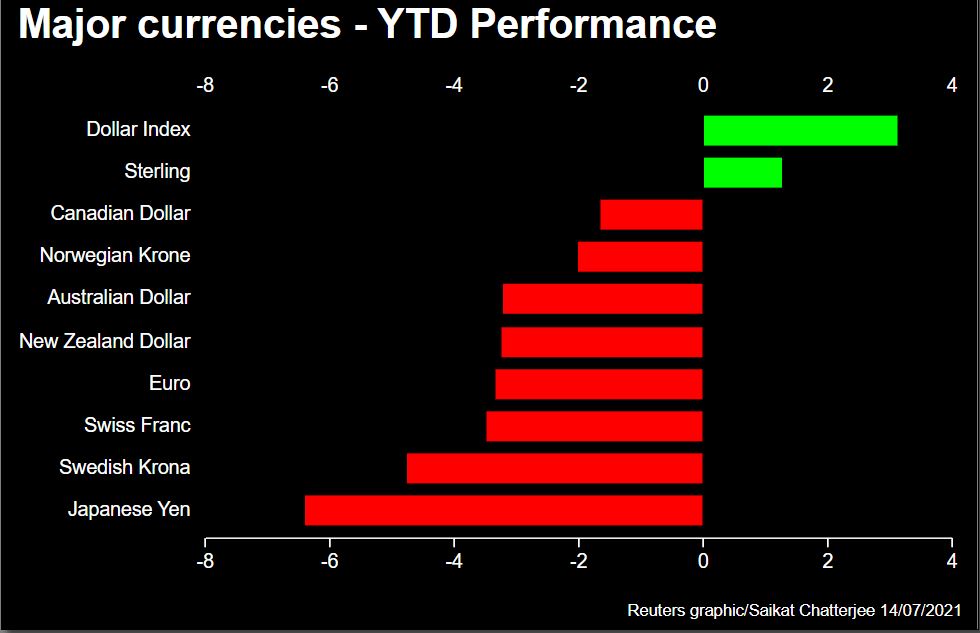 Traders were also waiting to see if the second day of Fed Chair Powell's testimony to the U.S. Congress would provide any more signals.

He had said on Wednesday that the U.S. economy was "still a ways off" from levels the central bank wanted to see before tapering its monetary support. read more

He also said he is confident that recent price hikes are associated with the country's post-pandemic reopening and are driving up inflation will fade.

His comments came after data published this week showed consumer prices increased by the most in 13 years in June. read more

The yield on inflation-protected bonds, sometimes called the real yield, dropped to minus 1.027% , near its lowest levels since February.

"The CPI numbers were pretty shocking to me," said Nobuyasu Atago, chief economist at Ichiyoshi Securities. "People say rises in used car prices are the main culprit but it's not just that. New cars, home electronic goods and services are all rising. And the past record shows when energy prices rise, that impact normally last for about two years."

In the currency market, Powell's dovish stance put a minor dent on the U.S. dollar.

The Chinese yuan dipped to 6.4628 per dollar in Asia after hitting a three-week high of 6.4508 overnight.

Oil prices dropped though after major global oil producers came to a compromise about supply and after U.S. data showed demand slacked off a bit in the most recent week. read more

Saxo Bank's head of FX strategy, John Hardy, said there was a pattern of market moves starting but then unwinding quickly at the moment.

"Everybody is just really uncertain on the transitory inflation narrative," Hardy said. "It feels like we need to get three more months of data before we can really get a grip on this market."

Syria's defence minister visited Jordan on Sunday to discuss stability on their mutual border, the first such meeting since the Syrian conflict erupted a decade ago when the two neighbours supported opposing factions, officials said.