July 6 (Reuters) - Oil prices tumbled on Tuesday in a volatile session after OPEC producers canceled a meeting when major players were unable to come to an agreement to increase supply.

On Monday, ministers from OPEC+, which includes the Organization of the Petroleum Exporting Countries (OPEC), Russia and other producers, abandoned talks after negotiations failed to close divisions between Saudi Arabia, the largest OPEC producer, and United Arab Emirates.

Initially, oil rallied on news of the breakdown in talks, but prices retreated as traders focused on the possibility that the strife will cause some national producers to open the taps and start exporting more barrels.

"The market is concerned that the UAE will step in and unilaterally add barrels and other people in OPEC will follow suit," said Bob Yawger, director of energy futures at Mizuho.

The United Arab Emirates said it would go along with output increases but rejected a separate proposal to extend curbs to the end of 2022 from an existing April deadline.

Some OPEC+ sources said they still believed the group would resume discussions this month and agree to pump more from August, though others said current curbs might remain in place.

The White House said Tuesday it was closely monitoring talks by OPEC+ and was "encouraged" after conversations with officials in Saudi Arabia and the United Arab Emirates.

No date for further talks has been announced.

Analysts expect U.S. producers to start adding supply due to higher prices after months of subdued activity. U.S. production is currently around 11 million bpd, so output has room to increase before nearing the U.S. record of nearly 13 million bpd reached in 2019. 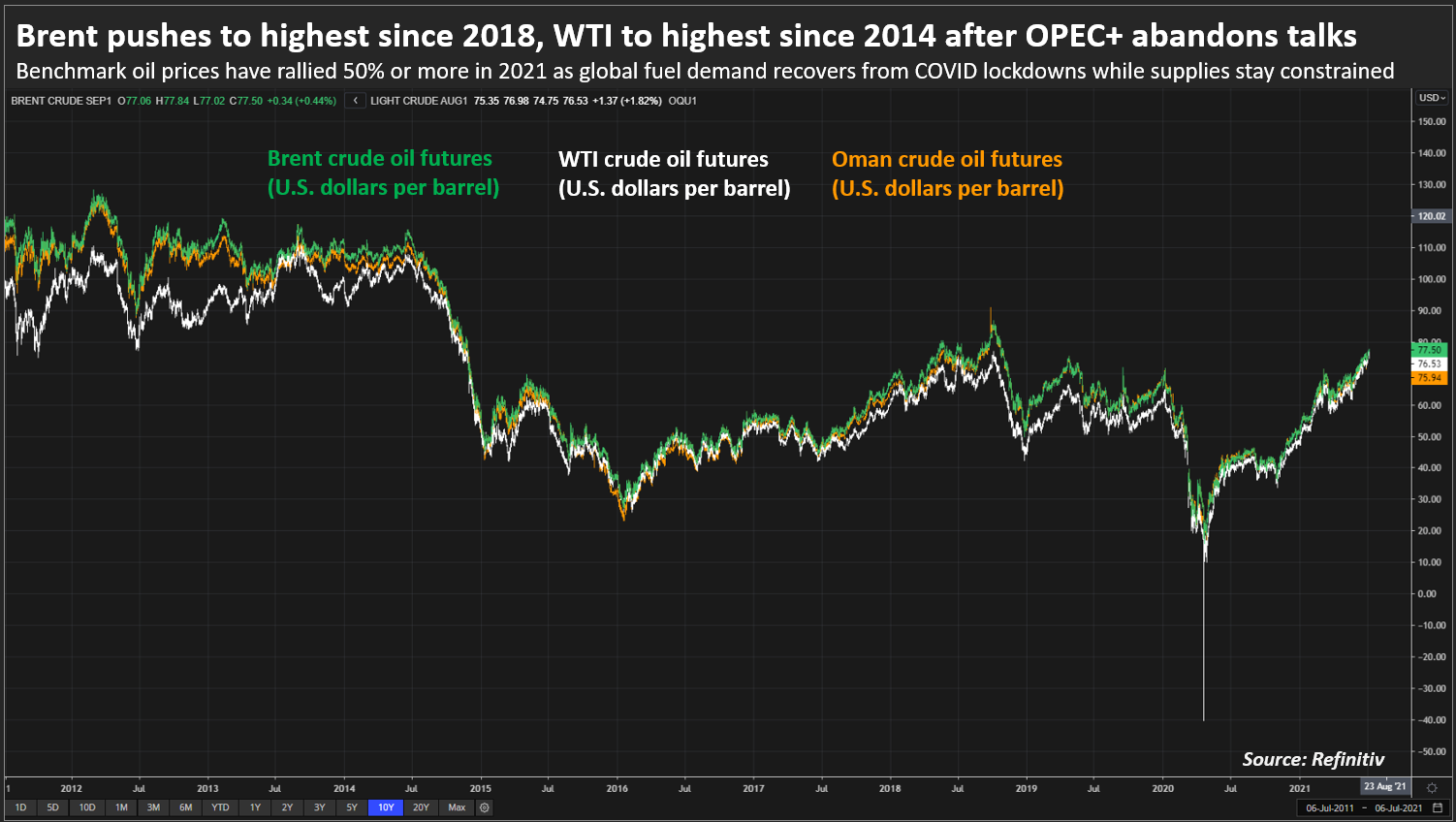 Goldman Sachs said the collapse of the talks had introduced uncertainty into OPEC's production path. The bank said it still saw Brent reaching $80 per barrel early next year.

On Monday, Iraqi Oil Minister Ihsan Abdul Jabbar said his country did not want to see oil prices soaring above current levels and that he hoped that within 10 days a date would be set for a new OPEC+ meeting.

Reports on oil and energy, including refineries, markets and renewable fuels. Previously worked at Euromoney Institutional Investor and CNN.