June 15 (Reuters) - The number of Britons with poor credit ratings is rising in the wake of the COVID-19 pandemic, just as many lenders who cater to them are going out of business - opening a gap in the market some credit bodies warn may allow illegal lending to flourish.

The subprime lending sector has been in the regulatory crosshairs for more than a decade due to complaints it charged interest rates in excess of 1,000% to people struggling to get by.

But a sudden spike in customer claims of unfair treatment during the pandemic is proving the final straw.

Data from Britain's Financial Ombudsman Service (FOS) showed claims filed against the home credit industry hit 6,091 in the last quarter of 2020 compared to 445 in the first.

That was up from just 30 in the first quarter of fiscal 2014/15, when the sector first came under the supervision of the Financial Conduct Authority (FCA).

Since then, lenders have paid customers 900 million pounds ($1.27 billion) in redress for unfair practices, according to the regulator.

The regulatory crackdown and waves of customer complaints have led to Amigo (AMGO.L), one of the country’s biggest subprime lenders, saying that unless its can agree a drop in its compensation bill, it will go out of business.

Competitor Provident Financial (PFG.L) last month said it was closing its once-booming doorstep collection business after a mountain of compensation demands, while smaller rival Non-Standard Finance announced an equity raise it said was dependent on talks with the FCA over compensation payments.

Subprime industry executives say many complaints they face are from claims companies (CMCs) looking for new revenue streams after years of focusing on Britain's payment protection insurance scandal. The association founded by five of the top UK CMCs did not respond to a request for comment.

Debt charities say tougher regulation to ensure customers are treated fairly was long overdue, but with firms now struggling to survive, the industry warns vulnerable borrowers may have nowhere to go.

Around 138 home credit companies left the sector in 2020, according to sub-prime lender Morses Club.

After news of the closure of Provident Financial's doorstep lending business, the England Illegal Money Lending Team (IMLT) warned consumers to be wary of "opportunistic illegal lenders who may try to fill the void".

"I do not think that competitors will step into every area and we may see the increase of illegal lending," Consumer Credit Trade Association (CCTA) Chief Executive Jason Wassell told Reuters.

The most financially vulnerable have only found their position becoming more precarious during the COVID-19 pandemic.

According to ClearScore, the average credit score for subprime borrowers fell to 197 from 200 between January and October 2020, while the average number of loan products available to them dropped to 1.82 from 1.91

The FCA said it had acted to ensure that the standards expected of the industry are upheld, which includes the need for firms to only lend to customers who can afford to repay.

It said its research suggested that only "a very small proportion" of those who were unable to get credit have used or considered using illegal money lenders.

ExcludedUK, a not-for-profit group set up in response to the pandemic to represent people who did not qualify for government support, said most of its 500,000 members felt subprime loans were their only means of surviving.

Its director Jennifer Griffiths says better government support is needed, such as low-interest bridging loan schemes with repayments only starting when the individual has a basic standard of living.

Credit unions typically require a member to build up savings before they can take out a loan, which may be impossible for borrowers who live paycheck to paycheck.

"This is why we have long argued the case for schemes such as a no-interest loan scheme, a pilot of which is being explored with government financial backing," StepChange's Sue Anderson said.

In the meantime, analysts say buy-now-pay-later (BNPL) firms such as Klarna and Clearpay, which offer interest-free payment options in installments, may be able to fill some of the gap left by shrinking home credit providers.

But their use is limited to registered merchants, and they do charge late fees and sometimes interest if payments are missed. One analyst said many consumers are also unlikely to have the credit score required for BNPL.

Numis analyst James Hilton said the future of the home credit market as a whole was very much in question after the Provident news.

"You need to question the viability of an industry when a major player who has been around for 141 years says they can no longer make it work." 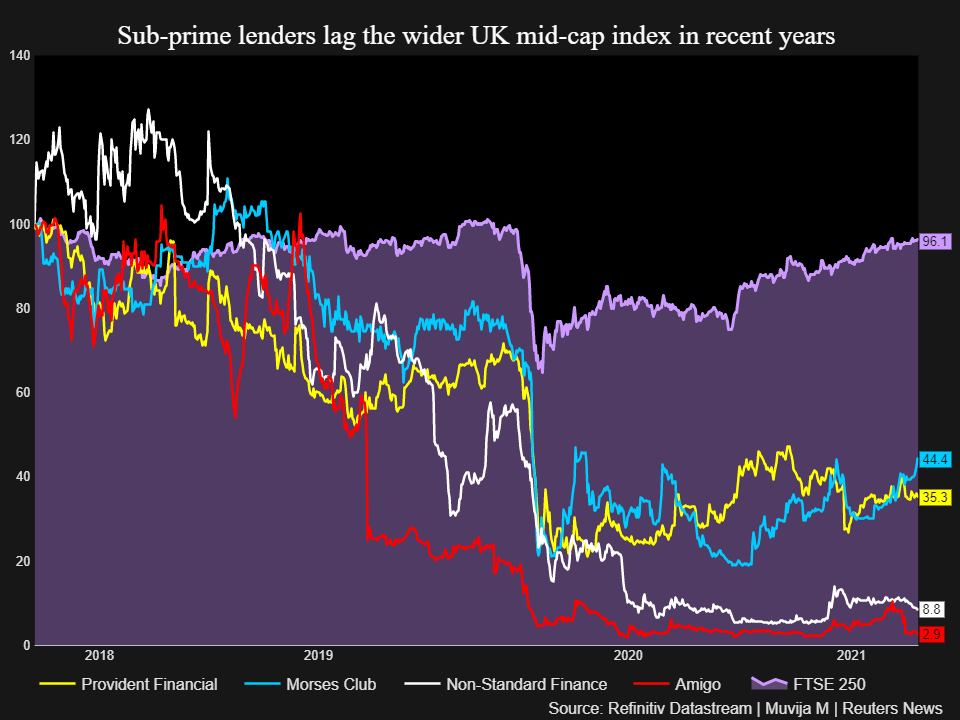 Reporting by Muvija M in Bengaluru; Additional reporting by Huw Jones in London; Editing by Rachel Armstrong and Jan Harvey