A view of a deserted street in Hemel Hempstead, Britain, January 5, 2021. REUTERS/Matthew Childs

LONDON, July 16 (Reuters) - Britain's economy will expand rapidly this quarter as additional coronavirus-related restrictions are lifted and further pent-up demand is unleashed, a Reuters poll found, but growth is at risk from new variants of COVID-19.

The country has suffered the highest death toll in Europe from the pandemic but a fast-moving vaccine rollout has allowed the government to withdraw many of the lockdown restrictions, with more set to lifted on Monday. read more

Gross domestic product will grow 2.5% this quarter, the July 12-15 poll found, a touch better than the 2.4% predicted last month. But medians showed that pace was expected to slow to 1.4% next quarter and then to 0.9% in early 2022, unchanged from last month's forecasts.

"So far, the UK data look promising in two respects. First, vaccines seem to have significantly reduced the health risks from the virus," said Holger Schmieding, chief economist at Berenberg.

"Second, the UK's GDP estimate for May shows that activity has rebounded with the easing of restrictions."

GDP expanded a monthly 0.8% in May, much faster than its typical pre-pandemic pace but down from April's 2.0% surge, official data showed last week. read more 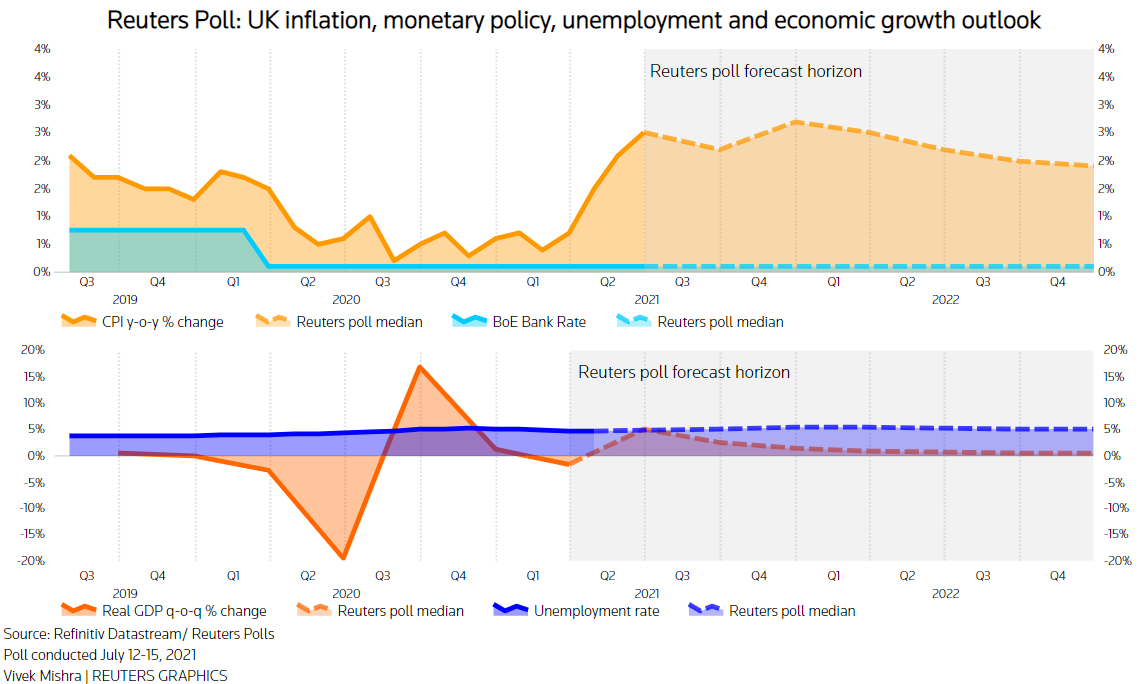 But when asked what was the biggest threat to those buoyant numbers over 70% of respondents said the spread of new variants of COVID-19.

"COVID-19 cases are rising quickly again and are showing few signs of slowing. With infection numbers doubling every 8-9 days, daily cases above 100,000 are entirely possible in the coming weeks," said James Smith, an economist at ING.

"Rising COVID-19 prevalence also means higher rates of contact tracing and self-isolation. These risks amplifying the current worker shortage in some of the consumer services industries, but could also see consumers reducing social contacts to mitigate the risk of having to stay at home for 10 days."

Like its peers, Britain has faced steep inflationary pressures as supply chains disrupted by the pandemic and increased demand have led to price rises.

Inflation was expected to average 2.2% this quarter and peak at 2.7% next quarter. However, that upswing is likely to be transitory and is driven by the pandemic-induced low base of last year.

So while those forecasts are well above the Bank of England's 2% inflation target the central bank was not expected to increase borrowing costs from their record low of 0.10% until 2023.

None of the 82 economists polled expected a change when the Bank announces is next policy review on August 5.

BoE interest rate-setter Michael Saunders said on Thursday the central bank could decide to stop its current programme of government bond purchases early due to an unexpectedly sharp rise in inflation, a day after another top BoE official said the time for action might be approaching. read more

"There is a risk, however, that inflation strength will prove more persistent, which may put more pressure on the BoE to tighten policy," said Chris Hare, senior economist at HSBC.

"There are genuine supply-demand imbalances which have become apparent during the economic reopening, which we think could persist or even build in the near term."

(For other stories from the Reuters global economic poll )

British finance minister Rishi Sunak's budget this week will include an extra 5.9 billion pounds ($8.1 billion) of spending for the health service over the next few years to drive down waiting lists, the finance ministry said on Sunday.