Stoked by his tax break on property purchases and a pandemic-driven rush for larger houses as more people work from home, house prices are rising at the fastest annual rate - at 13.4% in June - since 2004, lender Nationwide says.

The housing market holds totemic importance in Britain as a driver of wealth. Adjusted for inflation, house prices in Britain have grown since 1980 by more than in almost any other advanced economy, according to the Bank of England.

While the link between the domestic property market and international trade may not seem obvious, over the last 50 years there has been a reliable inverse relationship between house prices and the contribution of trade to economic growth, according to Reuters calculations. 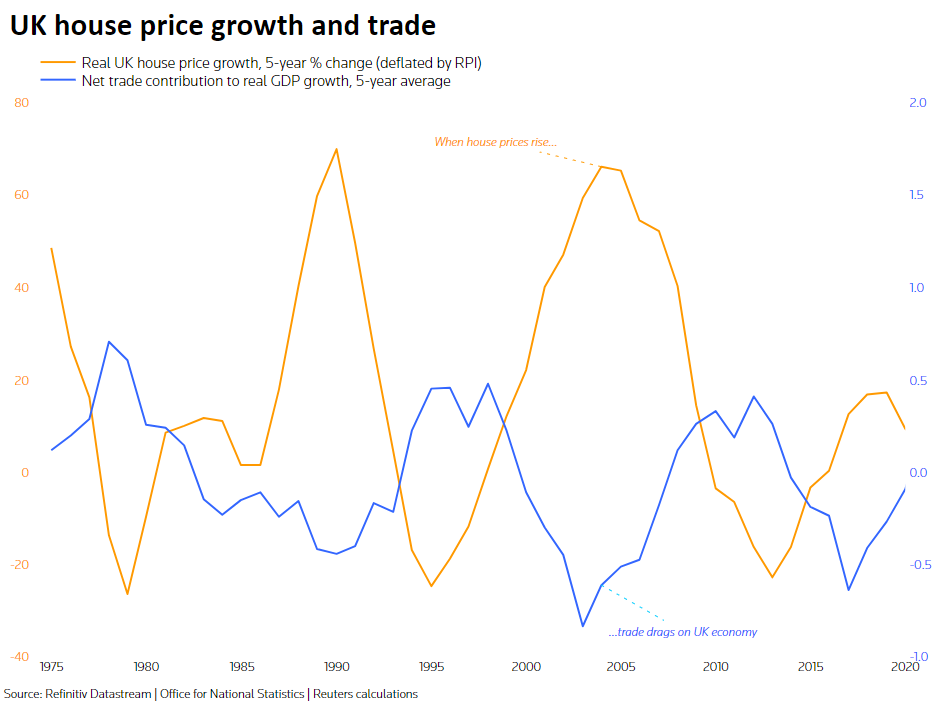 On the one hand, a roaring housing market helps to drive consumer confidence and household spending, boosting demand for imports which increases the drag on the economy from net trade.

That adds to Britain's reliance on foreign investors to fund its balance of payments deficit.

But less well known is its potential to crowd out manufacturing, which accounts for only about 10% of Britain's overall economic output but is crucial to exports.

Balazs Egert, senior economist from the Organisation for Economic Co-ordination and Development, said this link was similar to "Dutch disease" - when a booming sector, often linked to the discovery of a commodity such as oil, drains resources from other sectors to the detriment of the overall economy.

"If you have a housing boom, this will (put a) brake on export performance in an average country in which we observed this kind of boom in the past," Egert said.

"Looking at the 1990s and 2000s, then it's probably fair to say that if you have a booming construction sector and real estate sector, then certainly they're not very helpful for ... the manufacturing sector."

Egert applied his research to a panel of OECD countries including the United Kingdom, the United States, France, Canada and Australia and found that across them high house price growth was detrimental to exports.

The reasoning is that rising house prices increase the profitability of the construction and real estate sectors, which attracts labour and capital from higher-productivity industries such as manufacturing.

To keep talent, factories make wage increases that are not backed by productivity gains, which makes them less competitive.

The data bear this out. 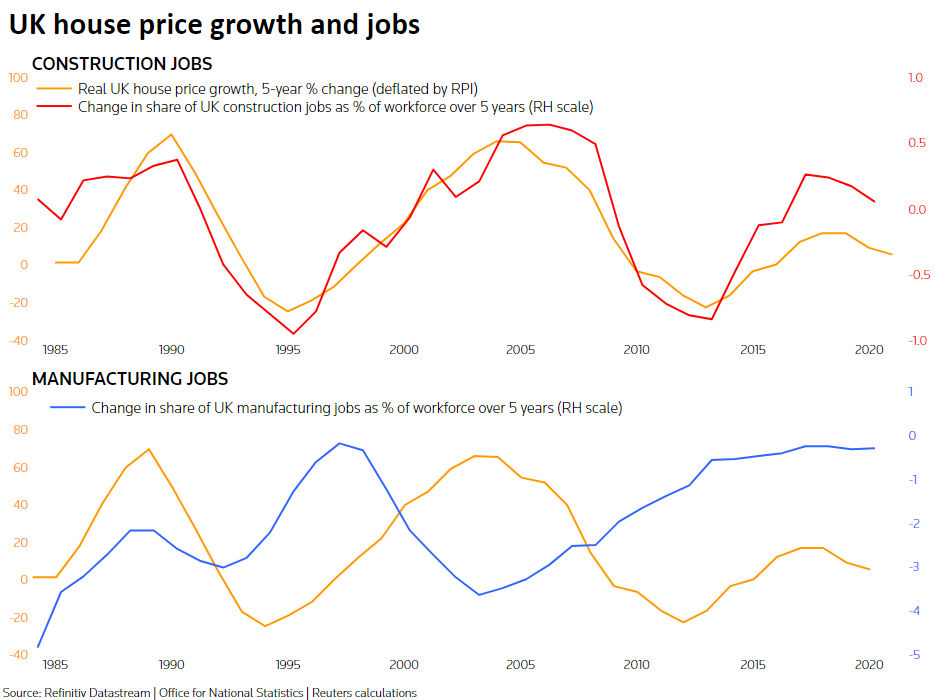 Changes in the share of construction workers in Britain's workforce have moved in lock-step with house price growth. The late 1980s and mid-2000s saw the fastest growth for both.

To be sure, manufacturing in Britain has declined over the decades with the loss of heavy industry to fast-growing emerging markets, but has stabilised in recent years around 10% of overall economic output.

A house price boom also has a tendency to attract foreign investment, boosting the domestic currency and making exports expensive - as happened in the early 2000s.

Whether this "double Dutch" dynamic re-emerges in Britain, depends on what happens to the housing market after the pandemic.

A flood of cheap money has boosted house prices across many advanced economies, potentially meaning British producers will not suffer a comparative disadvantage.

A Reuters poll of economists and housing market analysts in May showed the UK market was expected to slow substantially next year.

However, over the last 20 years forecasters have repeatedly underestimated house price gains, with two-thirds of projections since 1999 proving too low.

There are signs that house prices might rise more than expected again, even after the temporary cuts to property purchase tax, known as stamp duty, expire at the end of September.

"Even if the labour market does weaken, there is scope for shifts in housing preferences as a result of the pandemic to continue to support activity for some time yet," said Robert Gardner, chief economist at Nationwide.

The finance ministry declined to comment. It has previously said the cut to property purchase taxes had helped to protect hundreds of thousands of jobs linked to the property market by stimulating economic activity.

Policymakers have long yearned for a rebalancing of Britain's economy towards more export-led growth. Prime Minister Boris Johnson's government is pursuing post-Brexit trade deals around the world to that end.

But as the economy recovers from its COVID-19 slump, there may also be a temptation to stimulate the housing market again.

That temptation should be resisted, said Andrew Sentance, a Bank of England policymaker who is now senior adviser to Cambridge Econometrics, a consultancy.

"I'm not convinced that pumping up the housing market is actually a good way of stimulating consumption because house price inflation delivers economic benefits or financial benefits to people who already own houses," Sentance said.

The risk of upsetting homeowners, the most powerful bloc of voters in Britain, has in the past thwarted calls to build more homes without first trying to boost demand.

It remains to be seen if Sunak, who rushed out his housing stimulus last year to help the economy through its historic downturn, allows the market to stand on it own feet again.

Sunak has tried to boost investment by manufacturers with a "super deduction" policy which allows companies to cut their tax bill by up to 25 pence for every 1 pound invested until March 2023.

The Confederation of British Industry says he must provide more help to overcome global supply chain problems and labour shortages that have been exacerbated by Brexit.

Sunak will be hoping that he can avoid the patterns of the past when it comes to rebalancing Britain's economy.

In 2013, when the government launched its 'Help to Buy' subsidies for home-buyers and aimed for 1 trillion pounds ($1.4 trillion) of exports by 2020, the risks of over-inflating the market were apparent. House prices rocketed and exports fell some 283 billion pounds short of the target - even with a big post-Brexit vote drop in the value of the pound.

UK shares climbed on Friday, lifted by banks and travel stocks, as concerns about a sooner-than-expected policy tightening by the Bank of England eased after British retail sales fell unexpectedly in August.